Poland intends to notify the European Commission of plans to give state aid to some loss-making coal mines this month, according to Polish news agency – PAP.

“We declared that we will submit the notification application on the aid programme in February,” Polish Minister Wojciech Kowalczyk told PAP after a meeting at the Commission.

Poland’s mining companies have been hit by falling coal prices, rising production costs and a slump in demand, which has resulted in growing stockpiles of coal.

Earlier this year, plans were made to shut down four loss-making mines, owned by state-run Kompania Weglowa. However, miner protests led government to reconsider. The mines will potentially be sold to a private investor instead.

The government has said that in January – November 2014 the losses on coal sales by Kompania Weglowa amounted to 1.14 billion zlotys (US$309.36 million), with liabilities exceeding 4 billion zlotys.

Restructuring the four mines was initially expected to cost 2.3 billion zlotys (approximately €500 million), but the government has said that the figure may rise by 10 – 20% after a deal with the unions.

Poland now needs European Commission approval to inject government money into the mines, as EU state rules regarding mines are usually related to mines earmarked for closure. Kowalczyk has suggested that he is optimistic about talks with the Commission leading to approval for the aid.

The European Commission has approved public funding to help towards closing an “uncompetitive” coal mine in the Czech Republic. 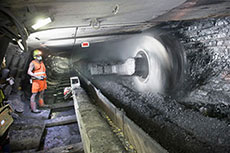 “No real effort” has been made to protect UK coal industry, MPs told at special session of the Energy and Climate Change Select Committee.