Seven mine rescue teams from all the Jastrzebska Spólka Weglowa (JSW) mines presented their extraordinary skills in the competition for the JSW President’s Cup. The best time was recorded by the Zofiówka Section team, which was subsequently crowned champion. 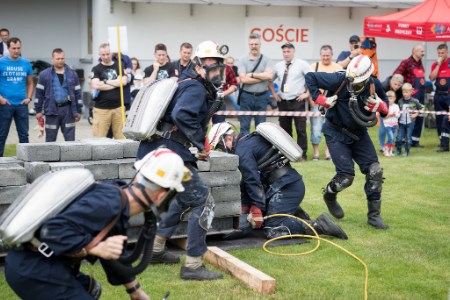 The mine rescuer competition was organised in Polomia near Mszana. The teams were cheered by mine directors, as well as Tomasz Sledz, Vice-President of the JSW Management Board for Technical Matters, who officially opened the event.

“Competitions help us improve and compare the skills of the teams. They also are an opportunity for us to meet and integrate. You should get to know and trust one another and know that you can count on your rescuer, because you are dependent on his performance underground,” said Sledz, wishing the teams all the best in their intense rivalry.

It was emphasised repeatedly that the competition was used to improve skills and exchange experiences.

“I am happy that we organise such competitions. Today, one of you will come first and someone will come last, but this does not mean at all that the last one is worse. I met you during last year’s rescue campaign and I know that we can count on all teams, not only from Jastrzebska Spólka Weglowa but also from the whole mining industry,” said Waldemar Stachura, Director of the Borynia-Zofiówka-Jastrzebie coal mine that organised this year’s event. “I would like to congratulate to you all on your courage and willingness to participate in this competition.”

The referees evaluated the rescue workers on a performance track in a simulated rescue mission and in first aid. The participants had to pass the obstacles that they can find during a real mission underground. There was a tunnel passage, lifting of a platform, crawling over an obstacle and transportation of an injured man.

“We have designed the contests in such a way that they promote teamwork first. The rescuers must cooperate in order to count on one another and to do these activities as quickly as possible. This is the opposite of the rescuer's job underground, but here teamwork is what counts the most,” explained Marcin Swierczak from the Central Mine Rescue Station who was the main referee of the competition.

The Zofiówka Section of the Borynia-Zofiówka-Jastrzebie coal mine, which won the JSW President’s Cup, will host the next competition.

Read the article online at: https://www.worldcoal.com/mining/12062019/jsw-mine-rescue-teams-present-skills-in-friendly-competition/