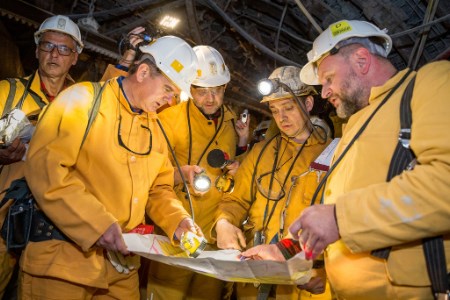 “To take responsible decisions, you need to be underground and precisely analyse the progress of the preparation of the new deposit,” said Adam Gaweda, Vice-Minister of Energy.

He added: “We were analysing maps, the project’s execution progress and completion timelines. I’m positively surprised that the work underground has really picked up the pace. According to plans, the first longwall will be launched by the end of 2022. It is very important to recreate this potential and to increase the mining output in the future while simultaneously maintaining the safety level.”

The Bzie-Debina mine under development has metallurgical coal resources estimated at 180 million t. Jastrzebska Spólka Weglowa intends to invest 3 billion zlotys in the mine by 2030.

Taking advantage of the visit in the Bzie-Debina mine, Adam Gaweda also visited the Central Rescue Warehouse in the Zofiówka Section. The Vice-Minister was accompanied by, among others, Tomasz Sledz, JSW Vice-President of the Management Board for Technical Matters, and Marian Zmarzly, Director of the Bzie-Debina mine under development.

Read the article online at: https://www.worldcoal.com/mining/10102019/preparations-for-mining-are-under-way/