Skip to main content
Advertisement
After a 4 year break, the Pniówek coal mine relaunched a longwall mined using the plough technology. 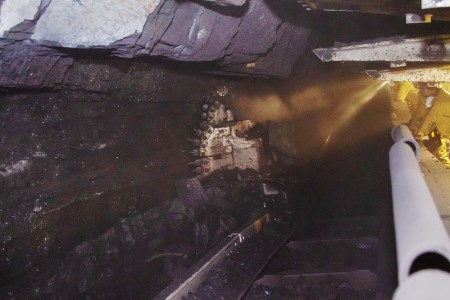 “The PW -1 plough longwall in seam 358/1 has the initial strike of 720 m and the length of 200 m. The coal is mined in a seam with the thickness ranging from 1 - 1.4 m. In the longwall we employ miners from the G-3 unit who have experience in operating plough longwalls,” says Marek Malcharek, Mining Work Manager responsible for operations in KWK Pniówek.

For the time being, the longwall is at the commissioning stage, but the target daily progress is planned to be in the range of 8.2 m with the daily output of 3000 t of coal.

The longwall shearer comprising: the GH9-38/VE plough, JZR-11/25 mechanised roof support sections and PF4/932 face conveyor, supports operation of seams with the thickness from 1 - 1.7 m. The plough head may have a cut of as much as 21 cm, working at the speed of 1.9 mps. Such fast daily progress of the longwall front requires efficient preparation of longwall roadways.

Worth noting is that a plough longwall is nearly fully automated and controlled using the control panel located in the longwall roadway. The staffing of the longwall is limited to the absolute minimum and amounts to 3 - 4 miners. In a longwall mined in the traditional way, 12 people have to be employed. Unfortunately a plough has its drawbacks. With such a fast progress, more miners in the longwall bays are required. The mining of the PW-1 longwall is planned to be closed by mid-March 2020.

“After we finish to mine the PW-1 longwall we plan to use the plough complex in further four longwalls with low seams,” say Malcharek.

Read the article online at: https://www.worldcoal.com/mining/07112019/pniwek-mine-relaunches-longwall-mined-using-plough-technology/