For the approximately 2000 Chinese companies operating in Africa, the continent remains an important and strategic investment destination despite signs of an economic slowdown in Asia, according to Standard Bank.

“When Chinese firms consider investment destinations around the world, Africa is always top of mind,” said Dr George Fang, Standard Bank’s Beijing-based head of mining and metals in Asia. “Africa is usually among the first destinations that are considered by Chinese companies that are looking to expand internationally, not only because of its abundant natural resources but also because of its rich cultural heritage, which in many ways is more similar to Chinese custom than that of the Western world.”

China is still unquestionably Africa’s largest single trading partner, with Standard Bank research estimating Sino-African trade to have reached US$ 210 billion in 2013, up 6% from the US$ 198 billion in 2012.  Chinese imports from Africa, which largely comprise hard commodities, including coal, reached approximately US$ 115 billion last year, while Chinese exports to Africa totalled about US$ 94 billion.

Despite China’s official Purchasing Managers’ Index (PMI) slipping to a six-month low of 50.5 in January, Standard Bank still expects the Chinese economy to expand by 7% in 2014. That follows economic growth of 7.7% in each of the preceding two years.

Dr Fang says that this slowdown is partly due to China’s government placing greater emphasis on more sustainable economic expansion, rather than simply chasing growth for its own sake. Although the global economy has undergone a fundamental paradigm shift since the 2008 financial crisis, Africa remains an important strategic partner for China going forward, he argues.

“The economic ambitions of Africa are ultimately the same as those of China – to open up new worlds of opportunity for its people,” said Dr Fang. “When China visits countries in Africa it creates partnerships and investments, it doesn’t leave a vacuum behind.”

“The economic futures of Africa and China are fundamentally intertwined,” said Dr Fang. “Africa’s rich natural resource base coupled with its emergence as one of the world’s fastest growing economic regions suggests its importance to China is only likely to increase over the coming years.”

Chinese demand for imported coal (both thermal and metallurgical) has been increasing, as the country looks to supplement domestic production. Chinese firms have therefore made large investments in mining interests to secure long-term supplies of fuel from countries, such as Mozambique.

Read the article online at: https://www.worldcoal.com/mining/05022014/chinese_investment_in_africa_479/ 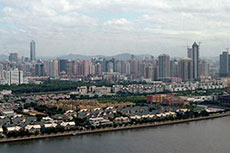 Guangdong province plans to make large investments in natural gas and clean energy to cut coal and oil use and reduce carbon emissions.

Shaanxi Coal raises US$ 661 million in China’s largest IPO since 2012.