The Belaz 75710 is the largest haul truck in the world and the first to have a twin-engine system under the hood. It can carry over 450 t – almost 90 t more than the previous largest truck. The first of its kind is now showing its mettle in a Siberian coal mine.

The truck, measuring over 20 m front to back and 8 m across, moves powerfully up the switchback climbs. It carries 450 t of rubble in its tipper. Fully laden, it rumbles purposefully toward its destination at 40 km/hr. The 75710 is the latest creation to be launched by the Belorussian manufacturer Belaz, and has been put through its paces at the Chernigovez coal mine in Siberia for the last few months. 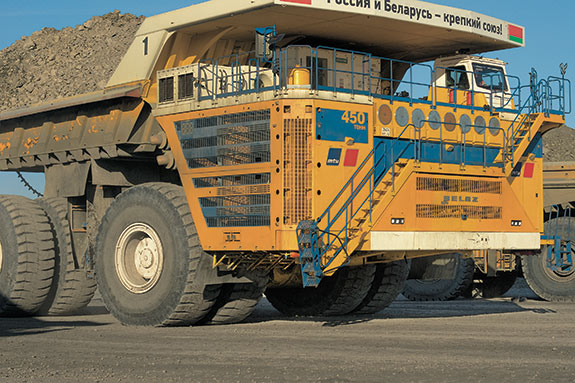 The Belaz 75710 excels in many respects; its wheels alone are taller than a lorry. Fully laden, it weighs 800 t, the equivalent of 20 lorries.

But why did Belaz decide to make such a large and powerful vehicle when there are already so many massive mining trucks on the market? "The answer is obvious," says Rainer Pelcz, Key Account Manager for mining vehicles at MTU. "Over time, the ratio between spoil and seam volume of a mine changes. More spoil, i.e., rock that contains no raw material, has to be carried away. If fewer vehicles can do that work, the mine saves on staff and fuel."

On the subject of saving, the Belaz 75710 is the first vehicle of its kind with a twin-engine system. Its two 16-cylinder MTU Series 4000 diesel engines produce 1715 kW each. When the truck is loaded, both MTU diesel use generators to four electric motors, which then drive the wheels. And there, too, the Titanic tipper sports a new feature: In order to transport this immense weight, the new Belaz monster has eight wheels instead of the usual four or six seen on most of the other haul trucks.

Two are better than one

The drive system of the Belaz 75710 has a special feature: The all-wheel drive incorporates dynamic traction distribution between the truck's two axles. If one of the electric motors should fail, the vehicle can still drive back to base in limp mode and therefore does not create an obstruction for other mine traffic or need to be towed back by a recovery vehicle. What's more, the all-wheel drive and hydraulic steering make sure that the 4 m high tires do not get stuck on rough terrain. Slippery surfaces are therefore easier to negotiate and braking is more efficient. 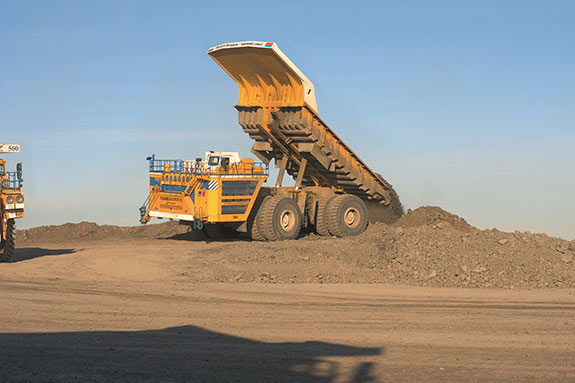 Up to 270 m³ of load fit in the tipping trough of the Belaz 75710. It takes just 26 sec. to move the two hydraulic pistons from the horizontal to the tipping position.

"We know that the MTU 16V 4000 C11 engines are enormously tough," says Vasili Shostak, Head of Commercial Division and Overseas Marketing Center at Belaz. "We already use them in many other models, which is why we chose these tough and reliable engines for our latest vehicle."A noticeable outward feature of the Belaz 75710 is the much deeper front end. It allows the two Series 4000 engines to be accommodated in transverse orientation, instead of the direction of travel.

Expansion of sales and service

Belaz already uses over one hundred 16V 4000 C11 engines in its vehicles, with a payload capacity ranging from 220 to 240 t. This gives the manufacturer a number of advantages, including tried and tested modularisation and scale benefits. This means that the same spare parts, equipment (e.g., oil, filter) and hardware and software tools can be used in various types of vehicles.

"Good trucks are essential for mine operators, but they are not enough. A perfectly running infrastructure is also required," says Dennis Gering, MTU Customer Service employee and onsite at the Chernigovez mine. "Day-to-day life in the mine is tough, so everything has to be right – from the fuel quality to the large onsite workshop right through to service, spare parts supply, training courses and regular consultation.” MTU has therefore been expanding its global sales and service network substantially for many years. Incidentally, what were until now the largest haul trucks in the world, the Liebherr T282 with a 363 t payload capacity and the Belaz 75602 (360 t), are also powered by MTU 4000 Series engines. 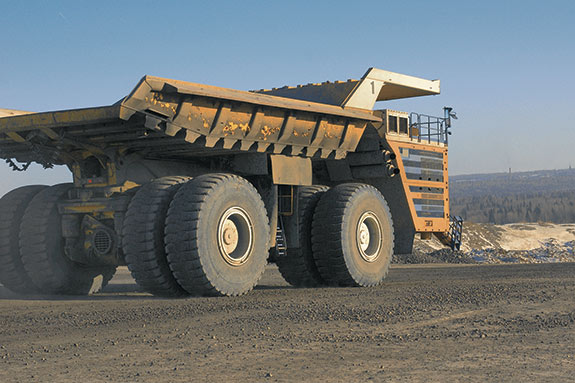 The Belaz 75710 is now showing its mettle in the Siberian Chernigovez coal mine, close to Kemerowo. When the truck is loaded, both MTU diesel engines are at work; when unloaded, one engine runs at idle speed.