Russia's first new-generation excavator on Sakhalin was recently put into operation at SUR. 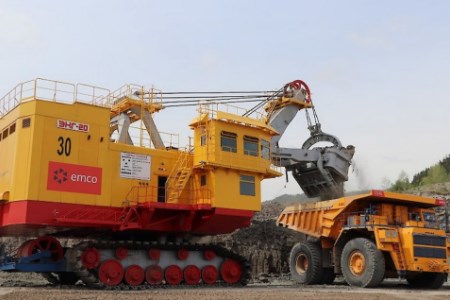 The EKG-20 excavator was manufactured by Yekaterinburg Uralmashzavod under the special order of the East Mining Company, and a new technique has been designed for excavation of overburden on the Solntsevsky coal mine. A distinctive feature of this excavator from analogs is the modified bucket volume. Given the characteristics of local breeds, it was increased from the standard 20 m3 up to 22 m3.

In the coal mine is the 21st excavator, but the first domestic and electromechanical. Before the enterprise acquired and operated electro-hydraulic excavators of Japanese and German production. The choice in favour of the Russian career technology is not accidental. In the domestic engineering industry, ECG-20 is a new generation excavator, whose mass production began about three years ago. It is not only not inferior in performance to foreign peers, but also provides a much more economical excavation. The equipment consists of 95% of Russian components, it is equipped with a modern AC drive, information management system, diagnostic systems of components and mechanisms, and control of workflow parameters.

“The excavator is fully electric. The use of an AC drive significantly reduces the cost of operating equipment. At the same time, the service life of ECG-20 is 20 years, with electro-hydraulic excavators it is seven years. All this has a positive effect on the enterprise's economy: according to our estimates, in comparison with electro-hydraulic equipment, this excavator allows to reduce the cost of 1 m3 by 2 - 3 times overburden rock,” noted Igor Kovach, the Director of the Solntsevsky coal mine.

Workers of the mine are calling the new excavator a giant machine. Its height is 18 m, width is more than 30 m, weight is 750 t. Today, it is the most dimensional career equipment on Sakhalin. For machines of such parameters, ECG-20 develops one of the highest speeds: 1.1 km/h.

The assembly of excavator equipment was carried out on the territory of the mine by representatives of the manufacturer and local specialists. Welcoming the participants of the solemn event dedicated to the commissioning of new equipment, Igor Kovach, on behalf of the All-Russian State Corporation, thanked for the well-co-ordinated and high quality work of suppliers of equipment, contractors and employees of the company – all those who were directly involved in ensuring that the next stage of technical re-equipment successfully passed.

Kovac wished trouble-free operation to the crews of the excavator and the new BelAZ trucks with a load-carrying capacity of 220 t working in conjunction with it. They entrusted the management of the new excavator to specialists who already have experience in working on this type of equipment in coal mines in other regions of the country. The first excavation of the breed, which marked the beginning of the operation of the machine, was carried out by the crew of Vasily Zhdanov.

“I have been working on such excavators for the sixth year, that is, in fact, they were still testing experimental samples,” Vasily said. “Now it is already more comfortable to drive and comfortable cars. This is important because the shift lasts 12 hours. The cabin is spacious, comfortable, there is a small refrigerator, microwave. Eight security cameras allow us to monitor the situation inside and outside the excavator. For communication of crew members, an internal radio is provided. Absolutely all the information about the state of technology is displayed on the monitor in front of the driver.”

Representatives of UZTM-KARTEX Management Company LLC, which includes Uralmashzavod, congratulate the team of Solntsevsky coal mine with an important event.

“EKG-20 is the first machine of this class on Sakhalin,” said Konstantin Smirnykh, Director of Sales of Excavator Equipment at UZTM-KARTEX management company. “In the geography of supplies of the plant, the Solntsevsky section became the farthest point. And the fact that this machine will work at the largest coal mining enterprise in the Far East, a significant event for us. This delivery is a vivid example of import substitution in one of the key sectors of the Russian economy.”

The annual technical re-equipment of the Solntsevsky coal mine allows it to achieve higher rates of coal mining. Along with this, the East Mining Company is upgrading other production facilities that provide for the extraction and shipment of coal in the territory of the Uglegorsk district. In 2019, the company will allocate about 11.5 billion rubles to the development of these areas.

Read the article online at: https://www.worldcoal.com/mining/03062019/new-generation-excavator-arrives-at-solntsevsky-coal-mine/