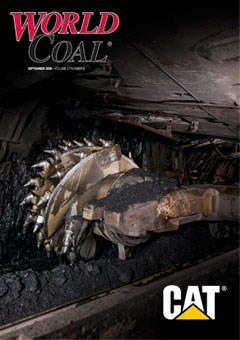 Over the last few months, the coal industry has been making headlines left, right and centre. One of the most prominent trends in recent news concerns major insurance companies cutting back on insuring and lending for new coal projects. Germany’s Allianz, for example, has sworn to stop selling policies to coal companies as a means of protecting the environment.

Yet, while many are seen to be turning away from coal, Russia is doing the opposite. The country is a major player in the global coal market; it is ranked as the third largest coal exporter.

At a 27 August meeting of the Commission on the Strategy for the Development of the Fuel and Energy Industry and Environmental Safety in Kemerovo, Russian President Vladimir Putin revealed that Russia intends to expand its presence in the coal sector worldwide.

Russia is also predicted to produce more than 420 million t of coal in 2018, which will see its current maximum level from 1988 beaten. At the meeting, Alexander Novak, Russia’s Energy Minister, announced that the country’s share in the global coal trade has risen three and a half times over the last 20 years, amounting to 14%.

Commenting on the strategies implemented to promote Russia’s coal industry, Novak stated: “Coal production targets for 2030 have already been achieved. That is, we are moving ahead of the long-term development programme. To compare with the updated programme of 2014, we are three years ahead of schedule. So, of course, the programme itself needs to be adjusted, and more ambitious goals need to be set regarding commissioning capacities, the quality of coal and the share of exports in supplies.”

Putin was also keen to highlight the recent competitive pressure within the industry. He explained that Russia must “diversify supply routes, [and] enter and consolidate positions in new markets” in order to gain a competitive advantage.

And the Russian President has his eyes set on one region in particular: Asia Pacific. It was noted during the meeting that coal’s stable growth in demand will continue through 2025 - 2030, in the Asia Pacific region particularly. Being categorised as one of the “most attractive areas with growing demand for a wide range of goods,” Asia Pacific could open up a number of opportunities for Russian energy companies.

Reportedly, South Korea, Japan, China, India and Vietnam are the primary consumers of Russian coal in the APAC region.

And it’s not just Russia’s coal exports to Japan that have grown. In January - July, the country’s leading coal terminal at the Vostochny Port shipped a record of 14.6 million t. This is approximately a 7% increase from the same time last year. This rise has been caused by Asia Pacific’s growing demand for Russian commodities – from South Korea in particular, which accounted for 5.1 million t (35%) of the overall total.2

Meanwhile, in China, the country’s implementation of energy tariffs – which were created in retaliation to the America’s new trade policies – will not necessarily affect its domestic market. If needed, China will be able to substitute its declining capacity of goods by raising Russian imports.

Clearly, Russia has no intention of phasing out coal. And, apparently, no need to either.