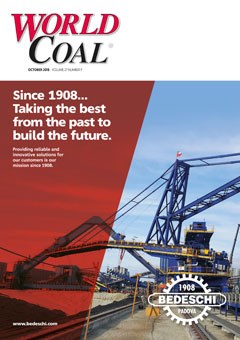 September was a tough month for the US coal industry, as Hurricane Florence lashed the East Coast. Now, in the wake of the storm, coal shipments from the affected ports have started to recover. But it hasn’t been easy.

Like many others along the East Coast, coal traders in the Carolinas had initially planned for a significant impact on the global markets. The storm broke rainfall records in North Carolina – over 30 in. of rain was reported in the region, as of noon on 15 September.

Prior to the storm hitting, Wood Mackenzie Research Director Matt Preston explained that the impacts on US coal exports would depend on the exact location of landfall and ensuing storm track.

He commented: “While the weather models are consistently showing a track that takes the storm south of Hampton Roads with a southerly inland track, there is always some uncertainty. Should the storm make landfall closer to the main ports, major delays in coal loadings would be expected due to power outages and regional flooding.”

This prediction was proved true: port loading operations stopped at Virginia’s Hampton Roads and vessels were forced to move offshore into deeper water for safety.

But that’s not all. Despite port operators staying open late to move commodities out, another main concern for coal stakeholders was the hurricane’s effect on onshore infrastructure. It was clear that the entire coal supply chain – from production sites, to ports, to the demand for dry bulk vessels – had the possibility of becoming disrupted if any infrastructure became damaged.

Ahead of Florence, Duke Energy Corporation, which is headquartered in North Carolina, appointed over
20 000 professionals across the Carolinas with the intent of being ready to restore power in the region once the storm had passed.

With the release of stormwater at the company’s Sutton coal-fired power plant following excessive rainfall, it’s now become evident that coal ash has been released from the site’s landfill.

On 17 September, inspections revealed a slope failure and erosion in a portion of the Sutton plant landfill, causing approximately 1529 m3 of material to escape. Fortunately, Duke managed to capture the majority of the ash in a perimeter ditch and haul road surrounding the landfill.

Spokeswoman Paige Sheehan indicated that the materials discharged from the lake are not a danger. She stated: “What we have seen is that a little bit of that arsenic is moving out into the [nearby Cape Fear River]. Again, very much within the standards.”

Santee Cooper and The South Carolina Department of Natural Resources are currently carrying out operations to prevent coal ash from contaminating the Waccamaw River. Floodwaters were originally predicted to reach Santee Cooper’s Grainger Ash Pond 2 on 25 September, but no overtopping happened.

The company confirmed this: “No water got into Ash Pond 2, where there is still ash. The water you may have seen is water that we pumped into the pond to equalise pressure on the dike. NOAA reports the Waccamaw River crested in Conway and that it did not overtop Pond 2.”

As it dewaters its ash ponds, the company is continuously collecting water samples and sediment quality from both the river and ponds. Consequently, Waccamaw Riverkeeper Cara Schildtknecht is not concerned about the health risks: “I think if they wouldn’t have already been so proactive in removing that coal ash, we’d be facing a completely different problem. It would be devastating.”

If there’s anything that the coal industry should take away from Hurricane Florence, it’s that there should be further preventative strategies in place to mitigate the effects caused by extreme weather. It’s obvious that the current procedures are effective, but are they enough?

One company that provides such remote diagnostics services for storm conditions is GE Power. GE Power’s Monitoring and Diagnostics Center is able to aid storm-affected customers and support the ramp-up of other power plants whilst those affected are shut down.

Justin Eggart, General Manager of Fleet Services for GE Power, explains: “Prior to the storm’s arrival, we reach out to our customers to ensure that they have the appropriate resources for critical recovery response. Being able to digitally monitor and diagnose remotely is helpful during a storm because it increases safety for employees and our ability to monitor the impact over a large geographic area.”