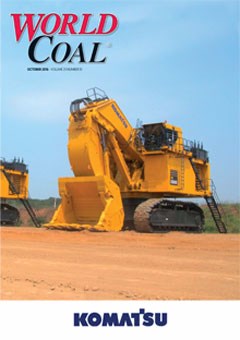 Walking Central Hall at the Las Vegas Convention Centre during MINExpo 2016, there was the usual array of large mining equipment on show. Yet for all of this iron, a shift has taken place in the mining equipment market that is forcing the traditional equipment suppliers to redefine their business. This shift includes the increasing use of technology in mining: the move to so-called digital iron that I discussed last month. But there is more to it than that.

Consider these three points. Firstly, there is a lot of parked and second-hand equipment available. It is to this parked fleet that mining companies are naturally turning as signs emerge that commodity markets may have reached bottom. This parked fleet – a result of huge equipment purchases during the supercycle – will suppress demand for new equipment well into the next upturn.

Secondly, the productivity drive that mining companies embarked on as commodity prices crashed has resulted in an equipment fleet that is able to “do more with less” – a phrase that has become something of a mantra in the mining industry of late. Using existing machines better – both in terms of increasing productivity and extending equipment life – will also delay demand for new equipment.

Finally, the great age of mine construction – and with it the great age of mining equipment sales – is very firmly behind us. This is particularly true in the coal industry where there is no need for the sort of greenfield mine construction that occurred during the supercycle. At least not for a while. Existing mine capacity is more than sufficient to deal with a generally weak demand picture (especially true of thermal coal).

Against this backdrop, sales of big capital equipment seem likely to remain sluggish (at best) even as commodity prices recover. The future for mining equipment suppliers lies in looking “beyond the iron”, as Denise Johnson, Group President of Resource Industries at Caterpillar, said in a press briefing before MINExpo 2016.

This idea takes a couple of forms: in the first place, it involves partnering with customers to provide solutions that meet specific needs. This was something very much in evidence in Las Vegas. Taking centre stage on Caterpillar’s stand, the company showed a number of films highlighting stories of collaboration between Cat’s dealer network and its customers. Joy Global brought two of its customers – including Anglo American Coal – to the show to present at its booth.

It also means greater and more flexible aftermarket services. Caterpillar, for example, offers a range of mining equipment repair options from a basic repair to a full rebuild. According to Dave Faber, General Manager – Aftermarket Solutions Division at Caterpillar, the company has experienced a significant increase in demand for certified rebuilds in recent years as machines purchased during the boom now reach the end of their service life. A trend towards repeated rebuilds – rather than new equipment acquisition – seems likely to continue in the mining sector as companies look to make the most of their existing equipment.

And then there is technology. Whether you call it “smart iron” or the “digital mine”, technology is reshaping the relationship between mining machines, their owners and their suppliers. The industry has reached a sweet spot for technology adoption where demand from customers has coincided with the ability and availability of technology supply.

Change in the mining equipment space was always inevitable – but it is now coming into focus as equipment suppliers bring products to market that meet the needs of a changed mining industry. This new world is above all about connections: connections to the customer, to the equipment, to mine workers, to the Internet of Things. And more widely, connections to shareholders, mining communities and society as a whole. The age of the connected mine is here.