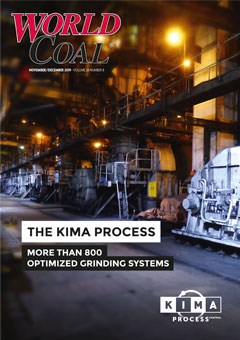 Welcome to World Coal's final issue of the decade. Over the last 10 years, the world has witnessed the coal industry experience its fair share of highs and lows. And trying to navigate its way through the peaks and troughs, some will say the industry is now the most vulnerable it's ever been. Coal-fired power generation is on the decline thanks to the low cost of natural gas and renewables, and simply attaining the correct permits for new coal plants can prove difficult, given the more recent regulations implemented to reduce greenhouse gas emissions and protect public health. What's more, many US-specific coal miners are falling victim to the tough economic environment, reporting disappointing financial results and, in some cases, even filing for bankruptcy.

On the surface, there's no denying that this looks worrisome. But looks can be deceiving. A great and unexpected example of this: back in March, local authority permission was granted for the development of a new deep coal mine in Cumbria (UK).

Why is this surprising? Because the Woodhouse Colliery coal mine, operated by West Cumbria Mining, will be the first to open in the UK in over 30 years. According to the company, the colliery will be situated on the former Marchon industrial site, from which access will be gained to the offshore coal seams via the existing Sandwith anhydrite mine portals. West Cumbria Mining intends to produce 3.1 million tpy ROM, with the purpose of replacing current imports from the US, Canada, Columbia and Russia. Once operational, the coal will be transported via rail to Redcar Bulk Terminal -- the deepest terminal on the east coast of the UK -- from which West Cumbria Mining means to export its coal via panamax ships.

In a recent statement, West Cumbria Mining confirmed it "can now start the process of delivering on its plan to build one of most modern mines in the world. It will supply the UK and international steel industry, deliver hundreds of local jobs and deliver a first-class supply chain across the country."

On 18 December 2015, North Yorkshire's Kellingly colliery shut its doors, marking the end of deep coal mining in Britain. Since then, more and more coal-fired power plants have been phased out, and newly proposed coal mines are being blocked by the government, citing climate change concerns. The Woodhouse Colliery itself, despite receiving approval, faced a similar stumbling block: it encountered a potential setback after former Westmorland and Lonsdale MP Tim Farron asked the government to 'call-in' the decision after unanimous planning approval was awarded. (A 'call-in' is where the Secretary of State for Housing, Communities and Local Government has the power to take over planning applications rather than letting the local authority decide). He urged the government to "invest fully in zero carbon energy" instead, but his request was rejected.

Fighting in the other corner, Labour politician Tony Lywood has welcomed the government's decision to green-light plans for the new mine. Though claiming to support green alternatives to fossil fuels, he insists the mine should be supported as it will not only create up to 500 new jobs in the region, but will supply the coal necessary for steelmaking. He explained: "We want a green new deal and green economy but you can't have a green economy without steel -- unless you find a way of making it without coking coal. [...] The reality is that we must have coking coal and it's better to take it out of the ground in the UK. You can't make windfarm blades out of wood; and the structures of solar panels also have to be made out of steel. Sometimes, you have to be practical and realistic about the best way forward."

To add, the project is particularly timely given that British Steel has just agreed a £50 million buyout by China's Jingye. As this could potentially increase the UK's steel production and contribute to over 20 000 jobs within the supply chain, a local resource of metallurgical coal will be a major boost to the industry and economy.

So it seems that despite the political and economic climate, in the UK and rest of the world, the Woodhouse Colliery has beaten the odds. It's anticipated that work will begin onsite in early 2020, with production commencing in 2022.