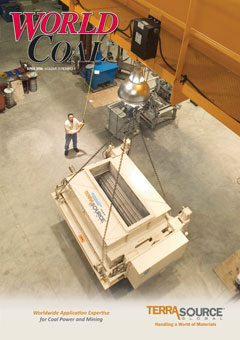 From Anglo American’s ambitious plan to slim down to just 16 assets focused on three core commodities (diamonds, platinum and copper) to the revelation by BHP Billiton’s CEO, Andrew Mackenzie, in an interview with the Wall Street Journal, that the company’s vision for the future is made up of a small number – “certainly less than 10” – of large assets focused on copper, petroleum, iron ore and coal, every month seems to bring more news of asset sales and restructuring plans at the world’s major mining companies. So where does this leave coal?

Anglo American is intent on exiting the coal business entirely; Rio Tinto’s coal assets are also up for sale. Add in asset sales from bankrupt or nearly-bankrupt US coal companies and there are a significant number of coal assets either already on the market or heading that way. But who is going to buy? As so often with things in coal currently, India kicks off the discussion.

“Indian companies will increasingly snap up cheap assets being sold by a number of majors, such as Anglo American and Rio Tinto,” Mitchell Hugers, Commodities Analyst at BMI Research told World Coal. It’s a trend already seen in southern Africa but could grow as the number of assets available cheaply increases.

Trading houses, such as Japan’s Sumitomo, Mitsui and Mitsubishi (already the world’s fourth largest mining company by value of assets owned), could also be tempted to buy up coal assets offered cheaply – although recent losses at Mitsui and Mitsubishi (the first since they were founded in their modern forms) might give pause for thought.

There may also be a role for specialist private equity companies, said BMI’s Hugers: “It's quite straight forward for this type of firm to become interested in buying cheap assets, holding on to them, cutting the loss-making aspects of the operations and then selling them on at a later time, when prices start to gradually pick up.”

In this mould, Anglo American recently sold off its stake in the Foxleigh metallurgical coal mine in Queensland, Australia, to a consortium led by fund manager, Taurus Fund Management. And then there’s always Mick Davis’ X2. The former Xstrata boss is yet to make an investment despite a significant war chest and rumours last year of interest in Rio Tinto’s Hunter Valley coal assets.

Finally, there may also be a re-emergence of smaller, regional players, Konrad von Szczepanski, a Partner and Managing Director at Boston Consulting Group, told World Coal. This trend has been particularly apparent in Australia: think New Hope Corp.’s acquisition of Rio Tinto’s stake in the Bengalla mine or Stanmore Coal’s purchase of the Isaac Plains mine from Vale and Sumitomo. “Winners will be the owners of the best (i.e. lowest cost, longest life) assets and those who can acquire medium-quality assets and improve their cost position faster than others,” said von Szczepanski.

But then again, coal is not going to lose its appeal entirely for the majors. It remains a core commodity for BHP Billiton centred on its world-class BMA metallurgical coal assets. Meanwhile – and as we reported last month – Glencore’s CEO Ivan Glasenberg said he’d be interested in increasing his company’s exposure to coal with the acquisition of Anglo American’s stake in the Cerrejón coal mine.

“In the long run, so next 3 – 5 years, we can actually see a re-emergence of the ‘old school’ majors,” concluded Hugers. “This is a long-standing view of ours regarding the iron ore sector, so no reason why this couldn’t be the case for coal.”