The average demolition age of dry bulk carriers fell its lowest in five years, according to international shipping association, BIMCO, on the back of record scrapping rates in 1Q16.

“The decrease in ship demolition age continued from 2015,” said BIMCO’s Chief Shipping Analyst, Peter Sand. “At an average of 23.3 yrs today, demolition age has decreased by 20.5% over the past four years.” 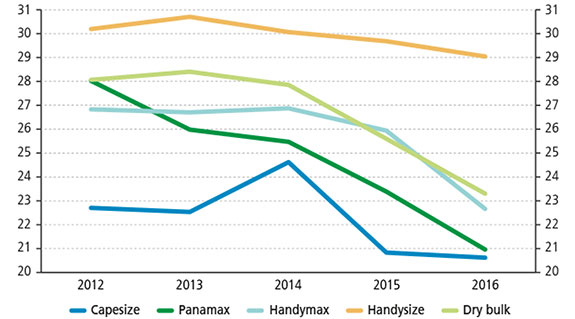 Only handysize demolition ages remain significantly higher than the industry average at around 29 yrs. Handysize scrapping rates have also fallen off significantly in 2016 at 9.5% of total scrapping over the first four months of the year compared to 18.1% over the same period in 2015.

Read the article online at: https://www.worldcoal.com/handling/31052016/average-bulker-demolition-age-continues-to-fall-2016-859/