New South Wales (NSW) premier, Mike Baird, has announced that a Chinese-backed group has purchased the 98-year lease on the coal exports Port of Newcastle for US$ 1.6 billion (AU$ 1.75 billion). The state government will continue to retain regulatory oversight of the port.

In a 50:50 joint venture, Hastings Funds Management and China Merchants Group won the state government auction, paying over the expected amount. An initial state budget plan had valued the lease on the port terminal at AU$ 700 million, however, fierce competition for Australian infrastructure assets coming onto the market has already seen a steady rise in multiples paid.

Hastings has AU$ 7.4 billion in funds under management, and has a portfolio of utilities, airports, toll roads and ports in Australia, the UK, the US, and Europe.

China Merchants, which owns a wide range of transportation, finance and property assets, had AU$ 819 billion assets under management at the end of December 2013.

The auction was “an incredibly competitive field”, with the tender attracting international and Australian bidders, according to Baird.

Local media have reported that other bidders for the world’s largest coal port included Hong Kong-listed Cheung Kong Infrastructure, a consortium of New York-based Global Infrastructure Partners and Deutsche Asset & Wealth Management, Macquarie and its partner China Construction, as well as one from ATEC Rail Group and fund manager TIAA-CREEF.

Investment Bank Morgan Stanley had been handling the auction process on behalf of the NSW government.

Baird said that AU$ 340 million of the proceeds from the sale would go towards Newcastle’s urban renewal programmes and about AU$ 1.2 billion would be invested in the state government’s infrastructure fund.

He said that approval from both the Foreign Investment Review Board and the Australian Competition and Consumer Commission had already been obtained.

A record 142.64 million t of coal was exported between 2012/2013 from the Port of Newcastle, an increase of 17% from a year earlier, according to its annual report. The coal export port services over 2200 vessels each year. The port’s land holding and assets will revert to the state government at the end of the 98-year lease period.

The deal for the Port of Newcastle compares to the AU$ 5.07 billion deal for 99-year leases for Port Botany and Port Kembla that was won by Industry Funds Management in an auction last year.

Australia’s state governments, which were previously hesitant to lose tax revenue by selling infrastructure, have altered their stance on the matter since NSW sold its desalinisation plant for AU$ 2.3 billion in 2012.

The federal government said in March that it would pay states to sell assets, as treasurers across regional jurisdictions agreed to do more to lure local and overseas investors to take a slice of an estimated AU$ 100 billion in infrastructure.

Read the article online at: https://www.worldcoal.com/handling/30042014/australia_sells_port_of_newcastle_781/ 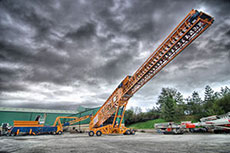 The use of mobile equipment for metallurgical coke loading at Port Kembla, Australia. 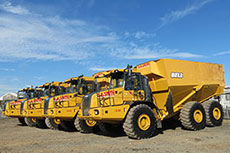 G A Smith Ltd has purchased four Bell Equipment coal trucks for use at the Port of Tyne near Newcastle.

Port of Newcastle could be privatised under plans announced in the New South Wales budget.