Australian railway company Aurizon and Indian coal company GVK Hancock, have reached a significant milestone towards their proposed transaction for the joint development of a railway line and a new coal terminal at the Abbot Point Port in Queensland’s Galilee Basin.

In a joint statement released today, the two companies announced they have reached an agreement to build a 300 km narrow gauge rail line to help transport thermal coal from the coal projects in the Galilee Basin to export terminals. The trains running on the line will be able to carry 25 000 t of thermal coal and connect into Aurizon’s existing network of rail lines in Queensland.

The proposed rail and port infrastructure being progressed by Aurizon and GVK Hancock also facilitates a staged consolidation of tonnes from numerous miners in the Galilee and the Bowen Basins, which will deliver significant benefits for regional communities by reducing the impact on agricultural land and the environment.

Krishna Reddy, chairman of GVK, commented: “I am delighted that we have made significant progress towards realising this project. During the last few months, we have spent a considerable amount of time with the senior management of Aurizon. This milestone symbolises our common vision and I look forward to progressing this historic infrastructure development together with Aurizon”.

Aurizon CEO, Lance Hockridge, said: “There’s been considerable work by both parties over recent months to better define the rail transport solution for the project, both from an engineering and a commercial perspective. We can see from our assessment that GVK Hancock’s coal assets are very well advanced.

“We’re pleased this also aligns with government objectives - getting early tonnes out of the Galilee, at lower cost by tapping into existing infrastructure and consolidating tonnages onto a common corridor.

“This work not only brings us a step closer to jointly providing the primary rail and port solution for the Galilee, it brings the whole region a step closer to realising the benefits of one of the largest regional development opportunities this state has seen for decades,” added Hockridge.

The proposed development of rail and port infrastructure is expected to attract an investment for Queensland of approximately AU$ 6 billion, and will provide over 1300 construction jobs and approximately 300 jobs once operational.

Read the article online at: https://www.worldcoal.com/handling/25112013/coal_railway_and_terminal_deal_290/

The US Department of Energy has recently announced plans to provide up to US$22 million for research aimed at achieving breakthroughs in the efforts to capture carbon dioxide directly from ambient air. 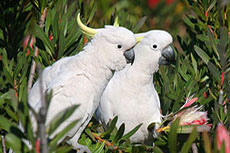 The Queensland government has issued a tender for coal exploration in the Bowen Basin of central Queensland.