National Ports in partnership with thyssenkrupp Industrial Solution have developed a self-unloading super shallow draft bulk carrier, the Transmax™, which is intended to revolutionise the transhipping operation in shallow water ports around the world. 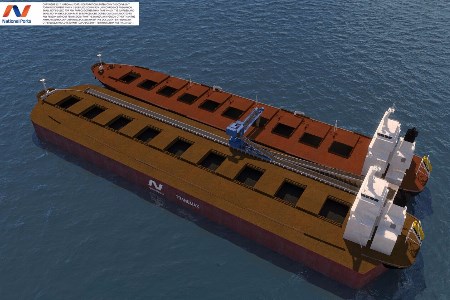 The Transmax is a 190 000 DWT bulk carrier on 14 metre draft, the existing capacity on the same draft is 120 000 DWT). Each self-propelled Transmax will be designed to match the depths of water available at each port, for example, a 60 000 DWT Transmax can transit a port with water depths of only 6.5 metre.

The Transmax is equipped with innovative cargo handling systems designed and built by thyssenkrupp Industrial Solution, capable to self-unload its cargo into any size ocean going vessel at rates of up to 10 000 tph compares with prevailing technologies with a maximum unloading rate of 3000 – 5000 tph.

The Transmax is able to self-unload cargo from any size bulk carrier and is a solution for draft restricted ports worldwide.

Limited draft is a worldwide problem

Examples of countries with challenging export/import

The average vessel loading iron ore at Port Hedland is 180 000 DWT on 18.2 m draft. Port Hedland’s inner harbour and channel have a draft of 14.3 m at low tide. Laden cape size ships can only depart the inner harbour at high tide.

According to the Pilbara Ports Authority, the maximum throughput capacity of the port is 577 million tpy. This will be reached in approximately three years.

The Pilbara Port Authority does not have a solution on how to increase the port throughput at Port Hedland beyond 577 million tpa.

The self-propelled Transmax opens (24/7) the draft limited port of Port Hedland to far greater tonnages with no dredging, CAPEX, or change to materials handling process or equipment.

The distance from Brazil to the markets of China, Japan, Korea, and other South East Asian countries, is about three times more than its Australian competitors. This represents a major additional shipping cost.

To mitigate the challenge of the extra distance in an effort to reduce the freight costs and allow Vale to compete with the Australian producers, Vale has built a fleet of very large bulk carriers (400 000 DWT Valemax).

Very few ports in China, Japan, Korea or other world countries can accommodate these 400 000 DWT vessels.

By positioning the self-propelled Transmax in deep water near the port of destination, Vale can deliver its bulk commodities with its Valemax ships directly to any port in the world.

The Transmax can self-unload the full cargo from the 400 000 DWT vessel and self-discharge it directly at the port of destination at the rate of up to 10 000 tph.

The effective net result is that the client will be able to increase the cargo throughput at almost zero cost.

Read the article online at: https://www.worldcoal.com/handling/22112017/national-ports-and-thyssenkrupp-develop-self-unloading-shallow-draft-bulk-carrier/