Robindale Energy recently started using a new SENNEBOGEN 875 material handler for loading coal from ships on the Monongahela River in Pennsylvania, US.

The material handler is equipped with the Green Hybrid system, which can save up to 30% more energy than conventional concepts. With the attached 14 yd double shell grab, it unloads up to six jumbo barges per day.

Upon taking over the coal handling station on the Monongahela River, Paul Theodorakos, Equipment Manager at Robindale Energy, was confronted with the task of increasing the loading capacities. While the work was previously done with an earth-moving excavator, the plan was now to find a handling solution that was specially tailored to the circumstances.

"All things quickly pointed to SENNEBOGEN," Equipment Manager Paul Theodorakos reported. "I have been in the coal business for 39 years, but I had never had to take care of unloading ships before. The modified earth-moving excavator from the 1990s was no longer able to provide the necessary handling performance. So I started to look for a solution."

The joint inspection of a SENNEBOGEN 875 at Charleston Bulk Transfer (CBT) in South Carolina, US, where the machine loads up to 12 500 tpd of coal, helped make the final decision. "Our host, Fabian Turner, President of CBT, was full of praise; the innovative Green Hybrid system in particular convinced me," Theodorakos looks back. 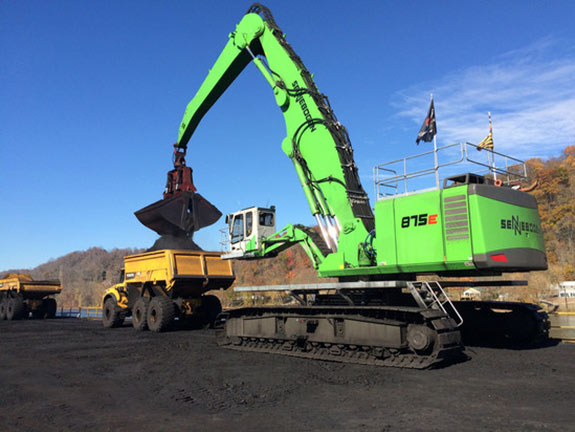 Read the article online at: https://www.worldcoal.com/handling/19012016/increasing-coal-loading-capacities-on-the-monongahela-river-69/