Falling resource prices mean producers must step up production to survive and flourish. But some coal and iron ore producers are finding that their efforts to achieve substantial increases can be frustrated by bottlenecks that emerge when they accelerate one part of the production chain only to find that problems then emerge in another.

“During the good times with high prices it was sometimes OK to tolerate production and loadout system that limped along at partial capacity. This was because of bottlenecks that were not always obvious at lower production rates, but that showed up at higher production throughputs when the choking points slowed down the entire operation to the pace of the slowest part,” says coal and ore handling innovator Tom Woods. 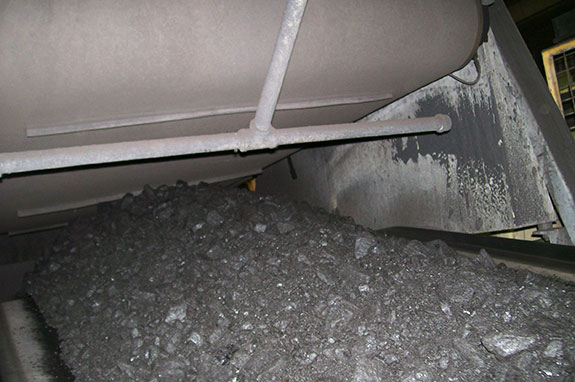 Blocked chutes pose a downtime and safety hazard in many mines seeking to step up production. A loss of production, clean-up cost and material handling hazards can result.

“Sometimes even major plants didn’t realize they had a problem They didn’t even have to acknowledge it existed, until they tried to boost production past previous levels. Then it could get ugly,” said Woods, who is Managing Director of T.W, Woods and a partner in Chute Technologies.

The Chute Technologies partnership employs a combination of three 21st century materials handling technologies to boost production outputs in existing coal and ore processing plants by as much as 50%.

These technologies were employed by the partnership recently at a Hunter Valley underground coal mine that was seeking to increase production capacity from a previous level of 1200 tpd to accommodate production surges up to 2200 tpd. The mine installed a number of new production units to feed more coal to its conveyors, which it sped up to accommodate the increased volumes. Accelerating the belts was necessary because of restrictions on belt widths.

“Unfortunately the increased product flows resulting from these improvements upstream in the production process ran into problems when they hit the chutes and materials handling system downstream in the process. The boosted output – and sometimes different stickier grades of product – caused blockages and hangups, resulting in lost days and safety hazards as the mess spilled over and had to be cleaned up,” explains Woods. “It was the sort of problem that operational people may not be aware exists until it all goes wrong one day and they realise they have a systemic problem rather than isolated issues.”

Chute Technologies addressed the problem at the Hunter Velley mine in a comprehensive and systemic manner, applying a combination of three skill sets that are more typically considered in isolation from each other, in a piecemeal fashion. Their focused and comprehensive review of operations included: 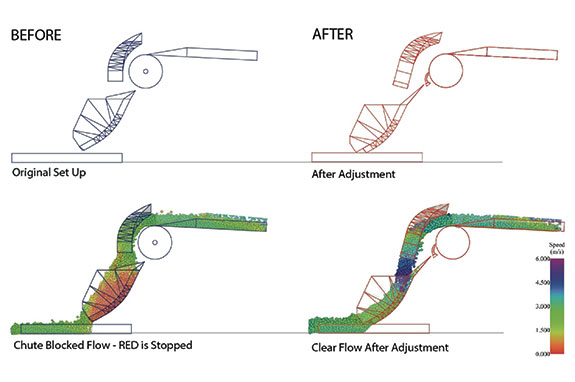 The combined technologies – which are applicable to new and existing coal and ore projects – produced the most cost-efficient and quickest way to comprehensively and permanently remedy the problem without having to resort to complete new plant.

This practical approach benefited from the decades of hands-on experience of the Chute Technologies partners, with the international fabrication and manufacturing expertise of T.W. Woods being complemented by the broad engineering and technology experience of Dennis Pomfret Engineering and McKajj Services, through which Director Gary Telford contributes extensive project management, engineering and drafting experience.

“The combination of technologies enabled us to produce a complete overview of the plant and focus on the weak spots,” said Pomfret. “Because we got a complete overview of where problems were occurring, we didn’t have to tear out everything and start again or spend months picking through individual problems.”

Pomfret continued: “At the end of the day we found that one of the five transfer chutes involved needed little or no attention – it wasn’t part of the larger problem - while a couple more could be remedied by redesign and replacement of components. We installed low friction surfaces and eliminated flow and impact angles that were causing problems with high throughputs, for example – especially where stickier product was involved, which had created ongoing wear and maintenance issues and spillages.” 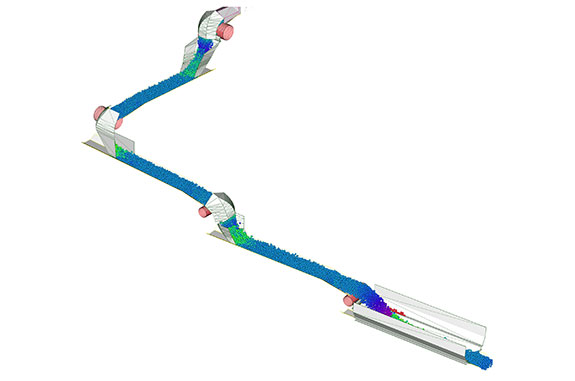 Only two of the five transfer chute arrangements eventually needed substantial re-engineering and fabrication by T.W. Woods, using the principles employed in the successful chutes. This replacement process was phased in without major interruptions to production and at a fraction of the cost of total replacement and plant shutdown.

Read the article online at: https://www.worldcoal.com/handling/13022015/optimising-transfer-chutes-coal1894/