Coal remains the dominant fuel for power generation in the UK, providing 41% of its electricity in 2013. Since 2003, coal imports have exceeded production and, since 2006, more coal in the UK has been produced from opencast mining than from deep mines. This would have been unthinkable 20 years ago, but there are now just three large deep mines in the UK, two of which are currently scheduled for closure.

With this background in mind, New Crofton Co-operative Colliery (NCCC) has been established as a workers’ co-operative that truly seeks to be part of the coalfield community in which it is situated. The planning application was prepared by the 10 founding members of the co-operative (all part-time), with assistance from some of the Founding Members’ companies and other consultants. Costs had to be kept to a minimum, as NCCC only had £100,000 with which to prepare and submit the application; £65,000 of this was needed for the planning application fee alone. Additional work to the value of approximately £200,000 was carried out with the agreement that fees would only be payable if and when the mine started production.

So with the support of an enormous amount of good will, the planning application, with full Environmental Impact Assessment, was submitted in November 2013. Consent was given just eight months later in June 2014, thanks largely to the strenuous efforts made to clearly communicate the aims and objectives of the project to the local residents, and winning their trust and confidence before the application was submitted.

The underground drift mine near Wakefield in West Yorkshire will recover up to 4.9 million t of coal over a 20-year period, employing 50 people in a workers’ co-operative. The surrounding area is mainly agricultural, with a number of villages close by (the closest property is 550 m to the northwest in New Crofton). The site is surrounded by mature woodland and remnants of the former mineral railway lines and embankments, which all help to screen the site from local residents.

The site lies immediately adjacent to the main Leeds to London railway. Functioning sidings, signals and points all exist within the coal mine curtilage. These were historically used to load coal from old surrounding opencast sites onto trains and will now be used to send out approximately 85% of the coal to coal-fired power plants, with the remaining 15% dispatched by road for domestic fuel and the steam heritage market.

The mining area is approximately 174 ha. and will extract coal from four of the Sharlston seams of the Middle Coal Measures in the Upper Carboniferous. The seams range in thickness from 0.7 to 1.6 m and some are split into two or more leaves.

Data from over 650 British Coal Opencast Executive boreholes has been supplemented by data gained during the excavation of a small opencast coal site some years ago. The mine will mostly operate within fault-bounded blocks, with the seams mainly dipping gently to the northeast or east. The deepest recovery will take place down to approximately 155 m, with the shallowest at 45 m.

Access to the seams will be by two parallel drifts, 5.5 m wide by 2.2 m high, with 25% decline. The upcast drift will contain the conveyor and will have two coal bunkers cut into the rock above it. These will feed onto a conveyor in order to load straight into the rail wagons when appropriate.

Coal recovery will be by room-and-pillar method (below), using a low height continuous miner and other equipment.The pillars will be 10 m2, while the roadways will be 6 m wide. This allows a theoretical recovery of around 63%, but the recoverable reserves have been estimated at 55%, to take account of losses and reduced extraction in certain areas. A twin-arm roof bolter will insert roof bolts to ensure the integrity of the roof and prevent spalling. 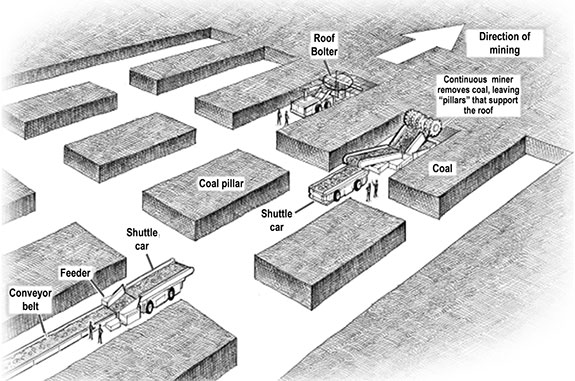 The development roads driven within the coal seams will be five-room entry (yellow in Figure 2), with two of the roads excavated to a height of 2.2 m, giving space for the conveyor and allowing a ventilation circuit to be established. Once the development road has reached its full extent, the equipment will start to work into the main seven-room entry panels, as shown in blue below. This configuration of pillars and rooms in the northern area of the Sharlston Top seam is shown below. It will take about 12 months to extract. 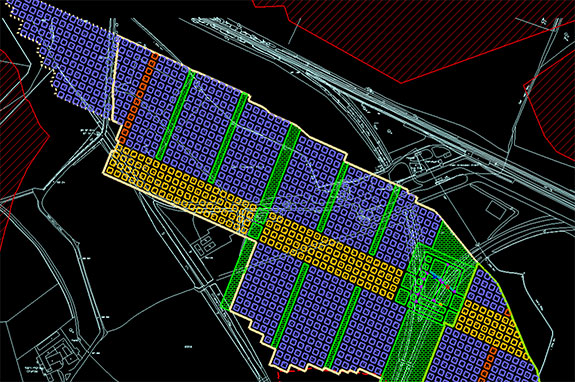 There will be no mining underneath the local villages and farms, while coal recovery is also reduced below potentially sensitive areas, such as roads, by reducing the number of rooms, thereby reducing the possibility of subsidence even further.

In the current climate, the idea of opening a mine in the UK producing over 200,000 tpy of coal for nearly 20 years may seem rather strange. However, the founding members of the co-operative believe that, with the continued need for coal in the UK, as well as the support of the local community, this has every chance of success. If so, it will create 50 high-quality sustainable jobs in the area and enable investment into other co-operative ventures totalling tens of millions of pounds, including other coal mines.

Read the article online at: https://www.worldcoal.com/exploration-and-development/26022015/project-profile-new-crofton-co-operative-colliery-coal1979/