East Energy Resources Ltd (East Energy) is an ASX-listed coal exploration company, which holds several Exploration Permits for Coal in the Eromanga Basin in central Queensland, Australia. The Eromanga Basin is southwest of the Galilee Basin, which has been the subject of extensive and ongoing development. 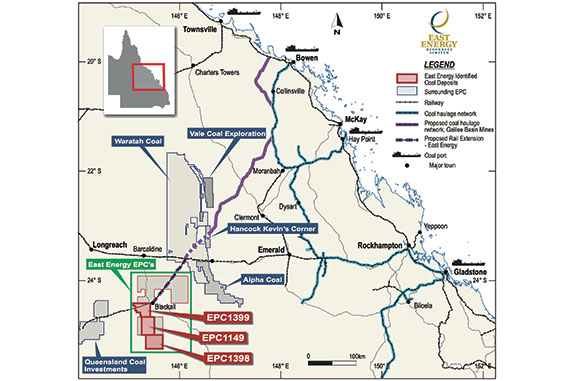 The company currently holds one of the largest coal deposits in Australia. The Blackall coal project has a strike length of 95 km and an average width of 6 km, with the coal seams dipping gently from east to west at an average of 2°.

In-situ resources currently exceed 2.8 billion t of JORC-inferred and 600 million t of JORC-indicated opencast mineable sub-bituminous coal, which is suitable for power generation. The company also has an exploration target in the range of to 2.5 billion t, which has been well defined by geophysically logged chip holes in areas adjacent to the JORC resource. All of the coal included in the resource estimates and targets can be mined using opencast techniques. A cut depth of 150 m has been used in all the resource calculations.

It is anticipated that the East Energy tenements could supply in excess of 60 million tpy of low rank sub-bituminous coal for many decades to thermal power plants.

The project is immediately to the south of the township of Blackall, in the Eastern Eromanga Basin. Blackall, with a population of approximately 1400 people, is a rural community within Queensland’s central west, on the banks of the Barcoo River. The topography consists of gently undulating plains with elevations of between 247 m and 311 m. Local rivers and their tributaries flow intermittently, normally only during the wet season. The location of the mine affords the ability to link into the proposed GVK/Hancock rail line from Alpha to Abbot Point port. There are, in turn, three new coal terminals (T3, T4 and T5) proposed for Abbot Point; thus providing Blackall with ample access to infrastructure.

Six main coal intervals (designated seams 1 to 6) are identified as being present in the broader project area, most of which comprise of several ‘upper’ and ‘lower’ plies. The 2, 3 Lower (3L) and 4 Upper (4U) seams are generally the thickest seams in the sequence. Average individual seam thicknesses range from 0.52 to 2.82 m in the resource area.

It is anticipated that the state and local authorities would be supportive of any responsible development that provides employment opportunities for locals, as well as an economic benefit to the town and region.

Australia offers a politically stable environment for investment. The Queensland government is very supportive of the coal industry, as it is the largest earner for the state. The government recently announced its support for a 300 km rail line, which will link the port of Abbot Point to the Galilee Basin. The government’s push for multiuser rail and port infrastructure provides confidence for companies investing in the future development of Queensland coal mines.

Read the article online at: https://www.worldcoal.com/exploration-and-development/05032015/project-profile-east-energy-resources-blackall-coal-project-queensland-coal2015/