A report from the WVU Bureau of Business and Economic Research foresees a decline in coal production by one-third from its peak in 2008 by the end of 2016. This corresponds to state-wide declines for the preceding six year. The report indicates that a combination of weak export demands and stricter emissions standards with large increase in oil and gas has caused coal production to decrease.

"It is vital that we understand the recent decline in coal output and why it has occurred," said Dr John Deskins, Director of the Bureau of Business and Economic Research. "We need to have a good idea of how much coal production we can expect to maintain in the state as we think about developing our economy going forward."

"One fact that many people do not realise is that the decline in coal production has not occurred evenly across the state," Deskins stated. The recent decline has entirely been driven by a drop in southern West Virginia coal output, while production in the northern part of the state has actually risen in the past few years. This divergence is due, at least in part, to lower levels of productivity in the southern part of the state, which have led to demonstrably higher production costs in many of the region's remaining coal reserves."

These predictions align with outlooks made by the Monongalia County Coal Co., which will cut 588 jobs due to declining market conditions. Dr Deskins co-authored the report and commented: “The bad news that we heard from the Monongalia County Mine is very consistent with our overall outlook. We're forecasting even further declines in coal and, especially in the shortterm, we're forecasting more significant declines.”

According to the report, between 2017 and 2020 West Virginia coal production is anticipated to recover moderately. However, the state-wide coal production is considered likely to decline for the rest of the outlook period – producing less than 96 million short t in 2035.

Read the article online at: https://www.worldcoal.com/coal/29052015/west-virginian-production-to-decline-by-a-third-2341/

US coal production has declined for the week ending 15 May 2015, according to the latest report from the US EIA and the National Mining Association.

The US is expected to lead a wave of consolidation in the coal industry, as years of depressed prices take their toll. 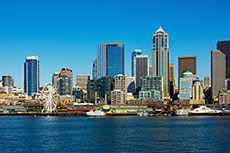 Mead met with the governor of Washington Jay Inslee at the state capitol in Olympia.

According to the Chief Economist of Queensland's Department of Natural Resources and Mines, the coal sector is showing some signs of recovery.