Following its successful transhipment project at the Go Gia buoys in South Vietnam which commenced last year, Oldendorff Carriers has recently signed an integrated coal transport and transhipment agreement for a new power plant project to be built in the North of Vietnam at Nghi Son. The customer is a consortium between Marubeni Corp of Japan and Korea Electric Power Corporation (Kepco) named Nghi Son 2 Power Limited Liability Company (NS2PC). 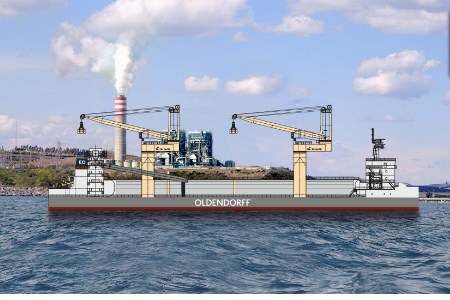 The agreement is expected to include the transportation of about 100 million t of coal over 25 years. Oldendorff Carriers signed the 25 year agreement with NS2PC, and will do the ocean transportation of the coal, and the transhipment and delivery to Nghi Son. Oldendorff will open an office in North Vietnam in order to perform the transhipment operations together with Vietnamese partners.

NS2PC started construction this year on two 600 MW power generation units on the coast of Nghi Son Province in North Vietnam. Both units will be completed in 2021 and are expected to consume about 4 million tpy of coal. The coal will be mainly imported from five ports in Indonesia; Balikpapan anchorage, Samarinda anchorage, Adang Bay anchorage, Muara Jawa anchorage and Muara Berau anchorage, in capesize bulk carriers.

Oldendorff Carriers intends to build two purpose built Transhipment Vessels (TSV’s) in China, with the first TSV being ready to tranship and deliver coal cargoes in 2021. The TSVs will have a length of 145 m, a beam of about 34 m with about 27 000 dwt on 8.5 m draft. The TSV’s will be equipped with two heavy-duty cranes for self-loading from the capesize vessels at anchorage, and a gravity feed self-unloading system for discharging the coal at the NS2PC jetty. Each TSV will also be equipped with two payloaders for efficient discharging of the OGV. The coal will be unloaded from the capesize by the TSV’s cranes at a designated anchorage about 11 NM from the NS2PC jetty. There will be about two capesize deliveries per month and each vessel will have on board up to two grades of coal.

The company’s current annual volume of about 30 million tpy of transhipment cargo sets it apart from its competitors. This new NS2PC project is a good example of a bespoke integrated logistics solution that results in substantial freight savings for customers. Insufficient port facilities or a shallow draft does not mean that its customers have to use small ships with poor economics. Oldendorff offers its customers a customised bulk transportation solution, from load port to designated jetty, including ocean transportation and transhipment, which is safe, cost-effective and environmentally friendly.

Read the article online at: https://www.worldcoal.com/coal/28082018/oldendorff-awarded-coal-transhipment-project-in-vietnam/