According to the latest analysis from the US Energy Information Administration (EIA), the dollar value of US net coal exports has increased more than three-fold since 2005. 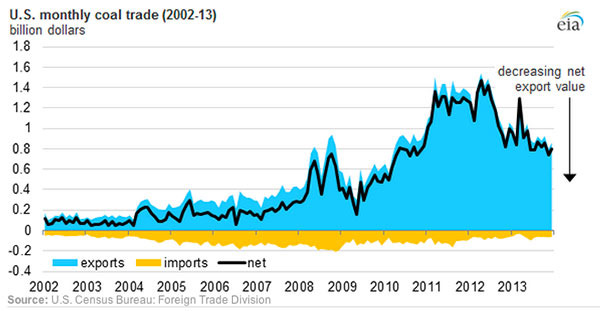 Graph of US monthly coal trade.

Although coal trade only accounts for about 5% of trade flows in energy fuels, the volume of US coal exports has steadily increased, from 50 million short in 2005 to a record 126 million in 2012. Export volumes set a monthly record in March 2013, before declining in the second half of the year. Coal exports are an increasingly important source of revenue for US coal producers, railroads, and barge companies. Coal's transportation through the supply chain affects its delivered price.

The recent growth in coal net exports has been driven by volume increases in steam coal exports and price increases in metallurgical coal, which generally sells at a significantly higher price per short ton than steam coal. 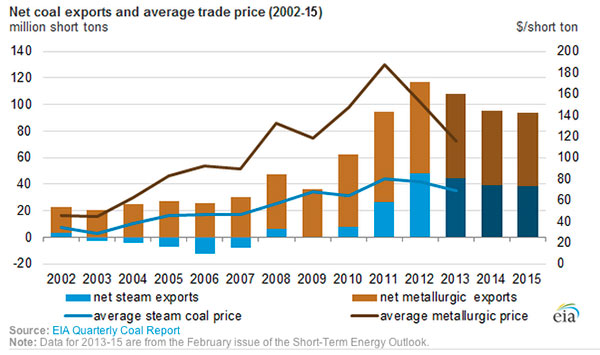 Despite the 2013 pullback in both volume and value, coal exports will continue to be important for companies involved in coal production and transportation. Key drivers of future US coal exports include global coal demand and production challenges that may arise in domestic production in China and India, the world's major coal consumers, and in production by leading global coal exporters, including Australia, Indonesia, and South Africa.

The US EIA has launched an online Coal Data Browser that provides information and statistics about the US coal sector.

US coal consumption will grow to 928.1 million short t in 2013 according to the US Energy Information Administration.

The Energy Information Administration has reported record monthly US coal exports in March as exports remains on track to break 100 million t for the third year running.