Unless market conditions improve, the Pinnacle metallurgical coal mine in West Virginia faces idling, according to the mine’s owner, Cliffs Natural Resources.

The company has already notified workers that the mine may be idled for more than six months from 25 August, as required under the Worker Adjustment and Retraining – or WARN Act.

Cliffs, in the midst of a proxy fight with hedge fund Casablanca Capital which wants to replace its chief executive, said in a separate statement that an estimated 397 employees could be affected.

The Pinnacle mine began operations in 1969, producing 2.8 million short t of metallurgical coal in 2013. 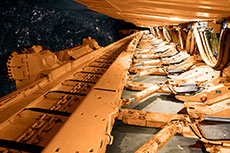 A Cat automated longwall plough system has set a new production record for a low-seam longwall at a mine in West Virginia.

The Highland Mine coal complex in Kentucky will be temporarily idled by Patriot Coal Corp.