In September 2015, Longmay Group, one of the large, Chinese state-owned metallurgical coal miners based in Heilongjiang Province, announced plans to reduce the headcount of its coal mining operations by approximately 100 000 during the following three months. The headcount reduction will be achieved through a combination of mine closures of old mines with depleting resources and higher-cost operations and divestment of subsidiaries, such as water and heat treatment plants. Some workers may also be reassigned to lower-cost operations from higher cost ones.

From what CRU understands currently, no workers will be made redundant, possibly owing to concerns around unemployment; however, the move will, effectively, lead to a substantial downsizing of Longmay Group's employee levels within the metallurgical coal mining operations.

The Longmay Group was established in 2004 as a direct result of the Chinese government strategy to consolidate small- and medium-sized coal mining operations under large state-owned enterprises (SOE). Longmay performed very well and went on to own mines in all four major coal mining areas of Heilongjiang province: Jixi, Hegang, Shuangyashan and Qitaihe.

By virtue of its large-size, it played an important role in terms of provincial revenue and tax. Since starting operations, the company also saw massive growth in employee numbers, a significant proportion of which are thought to have been at management level. As a result, we estimate that Longmay became uncompetitive in terms of labour productivity and it has one of the highest labour costs among all Chinese coal producers.

To illustrate, Longmay currently has about 240 000 employees for a ROM production of 57 million tpy, which compares unfavourably with the Shanxi Coking Coal Group, another leading Chinese metallurgical coal producer, which has 230 000 employees, but a ROM production of 160 million tpy. In CRU’s estimation, even after the current re-assignment of 42% of its workforce, Longmay will continue to be much below the national average in terms of labour productivity.

Besides the very high labour cost, a majority of mines that Longmay owns are approaching depletion, including those in the Hegang area that have been mined for almost 90 yr and those in the Qitaihe area that have been mined for about 60 yr. Longmay's coal reserves are on the wane and production has barely been sustained at 2011 levels when other miners showed significant growth. Its ROM production grew at a CAGR of less than 1% during the period 2011 – 2013 and declined by a massive 9% y/y 2014.

Unlike other coal companies in China, Longmay does not have developed downstream businesses, such as power generation and coal-based chemicals, and is, therefore, more vulnerable to coal market fluctuations. The company has attempted to raise equity three times in the last 8 yr, but failed each time, and the current downturn in the metallurgical coal market, which has now sustained for over two years, has hit the company hard.

What does it mean for other Chinese metallurgical coal miners?

An important consideration is whether the Longmay re-assignment points to similar developments at other Chinese metallurgical coal miners.

Firstly, in order to understand the similarities and differences between Longmay and other coal mining operations in China, CRU categorised the mines owned by Longmay into four groups, based on the classifications used in CRU’s Metallurgical Coal Cost Model. These groups are given below.

The following chart shows the margin curve for all Chinese mines based on CRU’s Metallurgical Coal Cost Model 2015. An examination of this chart shows that all the Longmay mines are losing money at current price; this is not unique, however. According to CRU's Metallurgical Coal Cost Model, the costs of mining coal in China have fallen by an estimated 15% y/y during 2015. Despite this, profitability across the sector has worsened, as illustrated by the 65% y/y decline in gross profits attained by the Chinese coal industry during the period January-August 2015. 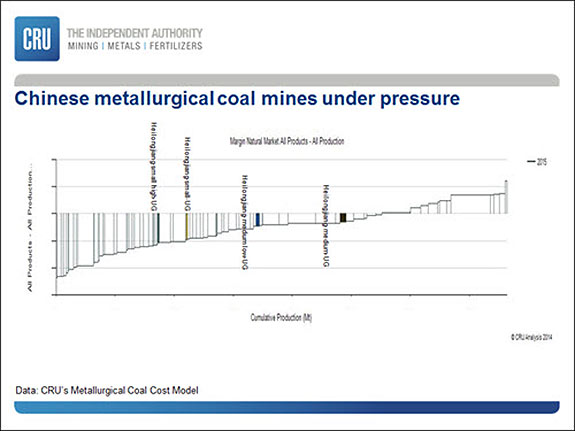 As a result, although miners have managed to stay afloat through cost reduction, including salary cuts and local government support (i.e. some tax and fee reductions), a majority of metallurgical coal mines in China are currently operating with negative margins.

With the combination of a bloated workforce, depleting resources and a lack of business diversification, Longmay was clearly vulnerable but, for these same reasons, it was also distinctive. As such, CRU does not expect re-assignments or lay-offs of the same scale elsewhere in the Chinese metallurgical coal industry in the near-term.

However, Longmay has demonstrated that, if a Chinese SOE drifts too far from the path of sustainable profitability, the state will allow it to wane in deference to market forces. Given the lacklustre underlying demand and current price scenario, the clock might, therefore, be ticking for some other Chinese miners.

About the author: Di Wang is a Research Analyst in CRU’s Steel Raw Materials Team.

Read the article online at: https://www.worldcoal.com/coal/24122015/analysing-longmay-workforce-reduction-3291/