Large Australian coal mining companies such as Glencore are scaling back operations to cope with a global supply glut, whereas the smaller New Hope Corp intends on expanding, according to Managing Director Shane Stephan.

New Hope does not sell its thermal coal to China - unlike its larger rivals - where new environmental restrictions and trade tariffs have hit imports.

Stephan said New Hope was sitting on a AUS$1.1 billion (US$864 million) cash pile with no debt and would look at acquiring more coal mines in Australia to add to its two existing collieries, which shipped 2.87 million t of coal in the last half, most to utilities in Japan, South Korea and Taiwan.

Mergers and acquisitions in mining have dried up since the end of the boom years left companies debt heavy and fighting for market share.

"We have the operational capability and the balance sheet, so we want to take the opportunity to make the right investments at a time when others are finding it quite difficult," Stephan said in a telephone interview.

Glencore, the world's biggest thermal coal exporter, put a spotlight on a world awash with coal last month by announcing a 15%, or 15 million-t, production cut. Two months earlier, it shut all of its Australian mines for two weeks, ordering 8000 employees to use up vacation leave.

Around the same time, Rio Tinto said it was letting go of its energy chief and rolling its coal assets into its copper business, a move that could signal its intention to divest coal assets.

Stephan did not rule out diversifying into metallurgical coal mining, which is dominated in Australia by BHP Billiton and Mitsubishi and also suffering from too much supply.

New Hope earlier reported a AUS$23.1 million first-half net loss versus a year-ago profit of AUS$22.7 million tied to write-downs of its oil and gas assets.

A rally in Australian coal prices has passed almost as quickly as it started. 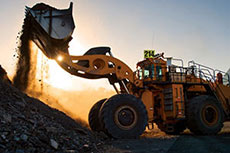 The Australian government has approved construction of a rail line that will connect Adani’s coal mines to Abbot Point.