"Our first quarter 2015 results reflect another strong operating performance with improved adjusted EBITDA generation over the prior-year period," said John W. Eaves, Arch's president and chief executive officer. "We continue to take proactive steps to reinforce our operational and financial flexibility. These actions are positioning us to manoeuvre through both near-term and long-term market challenges by optimising our low-cost asset base, being market responsive, controlling costs and managing liquidity."

As of 31 March, 2015, Arch had available liquidity of US$1.1 billion, including cash and short-term investments of US$939 million and undrawn borrowings on its credit facilities. "We are focused on managing our available liquidity through these difficult conditions," said John T. Drexler, Arch's senior vice president and chief financial officer. "As part of an ongoing review of our costs, we again reduced our capital and administrative spending during the three months ended 31 March, 2015, enabling us to lower spending expectations for full year 2015."

Arch made continued progress toward the company's ultimate goal of a Perfect Zero - a dual goal of operating without a reportable safety incident or environmental violation - with five operations achieving this high operating standard in the first quarter of 2015. The company also reported an improved total incident rate for the three months ended 31 March 2015 over the previous quarter and advanced its environmental compliance record.

"We are off to another year of strong safety and environmental performance," said Paul A. Lang, Arch's executive vice president and chief operating officer. "We commend our employees for their many achievements and are proud of their unwavering dedication to our core values."

"Despite lower shipment levels in the first quarter of 2015 when compared to the previous quarter, we increased cash margins by more than 20% in our Appalachian and Powder River Basin segments," said Lang. "Driven by a strong operating performance, our Appalachian region reported its lowest cost performance in four years, allowing us to lower our annual cost guidance for the region."

On a consolidated basis, Arch earned US$3.75 per t in cash margin in the first quarter of 2015 compared with US$3.36 per t in the fourth quarter of 2014, reflecting higher realisations earned in the company's Powder River Basin segment and a strong cost performance in its Appalachian segment. Consolidated sales price per t decreased slightly over the same time period, but was more than offset by a 6% decline in consolidated cash cost per t, reflecting lower cash costs in the Appalachian segment.

In the Powder River Basin, first quarter 2015 cash margin per t increased 23% to US$2.52 per t versus the fourth quarter of 2014. The improvement was driven by a 5% increase in average sales price, reflecting higher pricing on contracted t and a larger percentage of higher-quality t in the company's regional volume mix. Cash cost per t increased slightly in the quarter just ended, driven primarily by higher sales sensitive costs, the impact of lower shipment levels and planned repair and maintenance costs.

In Appalachia, Arch earned a cash margin of US$12.82 per t in the first quarter of 2015 compared to US$9.90 per t in the fourth quarter of 2014. Average sales price per t declined 6% over the same time period, reflecting softer pricing on metallurgical and thermal t and a lower percentage of metallurgical t in the regional sales mix. The US$6.96 per t decrease in cash cost in the quarter just ended more than offset the drop in the average sales price and the impact of lower sales volumes. The 12% cash cost decline reflects the strong operational performance in the region, especially at the Leer mine, and ongoing cost containment efforts.

In the Bituminous Thermal region, first quarter 2015 cash margin decreased to US$8.42 per t versus US$9.80 per t in the fourth quarter of 2014, reflecting the impact of a 30% decrease in sales volumes. Average sales price per t increased 7% versus the prior quarter, reflecting higher pricing on contracted t and fewer export shipments. Cash cost per t increased 17% over the same time period due to the impact of lower volume levels at the West Elk mine.

The global coal trade remains under significant pressure, as prevailing seaborne thermal and metallurgical prices have further softened and supply continues to outpace demand growth in the international thermal and metallurgical markets. Global steel production has declined 1% since the start of the year, marked by weakness in Europe and Asia, and steel capacity factors in the United States fell below 69% in April from 77% at the end of 2014.

Given recent market trends, Arch believes industry-wide coal exports from the United States will decline below 90 million t in 2015 compared with 2014 export levels of nearly 100 million t, with metallurgical exports accounting for most of the reduction. We expect seaborne coal markets to rebalance in time as demand grows, new global supply slows, and previously announced supply rationalisations take effect.

Arch now expects U.S. coal consumption for power generation to decline by 80 million t in 2015 as compared to 2014, due to the surplus of natural gas and the impact of new environmental regulations that took effect in April. As a result of these factors, utility stockpiles increased by an estimated 10 million t during the first quarter and are expected to build further over the course of the year.

"We started the year with a solid sales foundation, and we are building on that position by proactively adjusting our sales expectations and managing our exposure by layering in sales as appropriate to run our mines efficiently," said Eaves. "Looking ahead, we believe our diversified, low-cost asset portfolio and our continued focus on controlling the factors we can will enable us to effectively manage the business through market headwinds."

Arch Coal’s West Elk mine has broken a safety record for the number of hours worked without a lost-time incident. 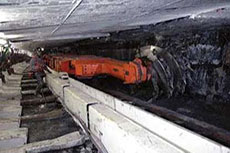 Arch Coal, Inc. today announced that it has acquired a 38% interest in Millennium Bulk Terminals-Longview, the owner of a bulk commodity terminal in exchange for US$ 25 million plus additional consideration upon the completion of certain project milestones.