Coal production in the US continued to decline this past week according to the latest report from the Energy Information Agency (EIA) and the National Mining Association. 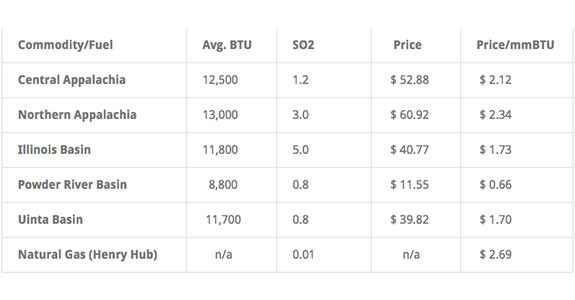 Rail car loadings also continued to decline, down 8.5% for the week from the same period last year, and they are down 3.5% year-to-date.

Electric output was up – by 0.7% for the week ending 11 April – and is down slightly (-0.4%) year-to-date. Steel output declined again for the week, down 12.0% for the week to just 1.62 million t produced and it continues its slide year-to-date — down 6.7% to 24.77 million t produced compared to 26.54 million t last year. As noted previously, a decline in steel production is considered a leading indicator of the broader economy and the continued declines we are seeing in steel production usually translate into declines in durable goods orders.

According to the West Virginia Office of Miners’ Health, Safety and Training, coal production in the state for 2015 (reported through 9 April, 2015) stands at 21.46 million t year-to-date, with 16.82 million t produced underground and 4.64 million t produced through surface operations. The number of mines reporting production in February increased to 113. The number of mines reporting production is subject to change as additional reports are submitted. The number of active miners working fell again, down to 15 585 from 15 604 last week. Underground operations had 12 686 direct mining employees while surface operations dropped to just 2899 employees. Again, we expect those numbers to change with additional reports.

Coal production in Kentucky for the week ending 11 April ticked down to 1.39 million t compared to 1.58 for the same week in 2014, with the state seeing declines in both its eastern and western fields.

Natural gas prices on the Henry Hub ticked up to US$2.69 per million Btu. Natural gas producers reported an increase in their stored reserves – up 15 billion ft3 compared to the previous week. Eastern fields reported a decline of 22 billion ft3 while all other fields saw increased gas in storage. This week’s working natural gas rotary rig count dropped sharply to 988, from 1021 last week and 1831 a year ago. This number includes rigs working in both oil and gas plays.

Utilities did not issue updates to their stockpile reports once again this week.

Read the article online at: https://www.worldcoal.com/coal/20042015/us-coal-production-drops-week-ending-19-april/

US coal production dropped 1.4 million short t in the week ending 21 March compared to the same period in 2014, according to figures form the US Energy Information Administration.

US coal production dropped 1.4 million short t in the week ending 14 March compared to the same period in 2014, according to figures form the US Energy Information Administration.

US coal companies are expecting a better year as a long winter and higher gas prices boost demand.