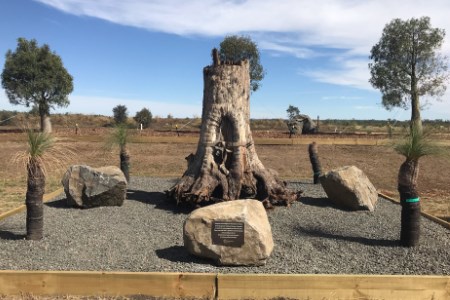 The garden area features three scar trees, which were removed and repositioned by the Barada Barna People, as well as five mature bottle trees, 10 mature grass trees and 150 other native plant species. Some large feature rocks from the nearby quarry have also been moved to the garden.

Often over 200 years old, scar trees have an oval space carved out of the outer bark of the tree, with the bark used by Indigenous Australians people for shelters, containers, shields and canoes.

“The garden wouldn’t look the same or have the same cultural significance without the influence and assistance of Barada Barna — we are so pleased to have it all in place for site visitors and our team to enjoy and learn from,” she said.

It took close to three months to plan the garden, and around two weeks to get the irrigation laid, garden beds dug, trees planted and the landscaping completed.

Read the article online at: https://www.worldcoal.com/coal/19062019/stanmore-coal-completes-isaac-plains-archaeological-area/