Eight miners trapped underground for over seven hours have been freed in western Colombia. Loma Goma coal mine collapsed around dawn on the morning of Tuesday 17th May. The cause of the collapse has not yet been established.

The combined efforts of police, firefighters, the Civil Defense and the Red Cross lead to the rescue, with Jorge Ivan Ospina, mayor of provincial capital Cali, praising the “quick action” and “cooperation” of the emergency services. He also added that “by luck” had the trapped miners been recovered alive.

The rescued miners are said to be “well” and being supplied with oxygen, according to reports by local newspapers.

Some 173 miners died in mining accidents in 2010, including 73 in a single explosion in Antioquia. In January 2011, 21 miners were killed by a gas explosion in a coal mine in northeast Colombia.

Read the article online at: https://www.worldcoal.com/coal/18052011/eight_rescued_from_collapsed_colombia_mine/ 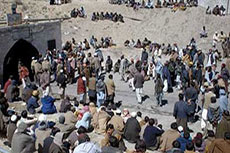 The number of dead from a collapsed mine in southwest Pakistan has risen to 45, according to officials.