Wood Mackenzie says that coal is facing increasing competition from gas in the power sector. Coal has dominated as the fuel of choice in Asia, even in the gas-centric power markets of SE Asia since 2010. In recent years, it has been assumed that coal will remain the most economical option for power generation. However, downward pressure on gas prices as well as individual market conditions in Asia are creating conditions in which it might compete with coal in the region.

Mr Graham Tyler, Research Director for Asia gas & power says, “While gas-coal competition is more commonplace in the US and Europe, in Asia, this is a new dynamic as coal and gas prices have not been at close enough levels for this to be a consideration. Spot LNG prices have fallen to around US$7 per million British thermal units (mmbtu) in recent months and we do not forecast any sustained price recovery above US$10/mmbtu with over a 100 million t per annum (Mtpa) of new LNG expected to be operational by 2020. This looming supply glut will create an environment where coal versus gas competition in Asia is a real possibility.” Asia’s near-term gas demand growth is slowing, primarily due to a weaker economic growth and structural changes in the key market of China.

Turning to coal, Mr Prakash Sharma Research Director for Asia coal markets, says, “Benchmark thermal coal prices in the seaborne market are trading below the marginal cost of supply for many producers, and therefore are unlikely to fall significantly lower in the future. Coal prices are sitting at multi-year lows due to several factors including weakening demand and domestic protectionism in China: Delivered thermal coal prices have fallen from a peak of around US$110 per t (US$/t) in 2012 to below US$80/t in recent months already and historically, coal prices only fluctuated within a narrow band of US$2-4/mmbtu."

Currently coal accounts for half of all power generation across Asia, while gas only accounts for 11%. However with coal prices not expected to fall more dramatically and gas prices expected to see renewed softening after this summer, Wood Mackenzie asserts that the price differential between gas and coal will be one to watch.

Mr Tyler says; “The price differential is key but there is not one single price across Asia at which gas will compete with coal. Instead, environmental initiatives and individual market influencers will determine the points at which the scales will tip in favour to gas. This is because Asia is not a singular gas market. Rather, it is a diverse range of markets with differing characteristics such as levels of economic development, fuel resources, market structures and government policies. The power markets are also discrete and have different dynamics even within some countries. Consequently, the factors that set the price at which gas will compete with coal differs between each market.”

Wood Mackenzie's analysis points to China, South Korea and Malaysia as examples of this market diversity. Mr Tyler explains, "South Korea reflects a mature economy with an energy market dependent on imported fuels, and therefore has relatively high fuel costs. It has also introduced a carbon cap and trade scheme in January, which will favour gas due to its lower carbon content and thus; lower related carbon costs. Whereas in China, air quality is a key issue and gas-fired power generation is subsidised in some provinces. China is also introducing a national carbon trading scheme; and other markets are also implementing or looking at carbon initiatives. These factors all make gas the more attractive option.”

Wood Mackenzie expects that pressure on the regulated price will allow an increase in gas-fired operation For example, Peninsular Malaysia is currently oversupplied with pipeline gas - a situation forecast to continue until 2020. Mr Tyler says “We have already seen delays to new-build coal plants currently under-construction in Malaysia. In a low commodity price world, where local gas production is over-supplied, if gas prices stay attractive we may see gas having a greater role. With weak gas prices and increasing environmental pressures, the cost of switching to gas-fired plants could become more economical. This shift in the competitive dynamic between coal and gas must now be front of mind for energy planners, utilities and fuel suppliers.“

Wood Mackenzie says that Asia’s strong long term economic growth will see power demand growth average 5% a year through to 2030, which will require over 2000 gigawatts of additional power generation capacity to be built between now and then. With gas prices set to remain soft and increasing environmental pressures, it's likely gas will account for a higher proportion of this new power generation. As long as gas prices remain low, industry players need to continue to watch for individual market influencers to see where the most upside for gas may emerge. 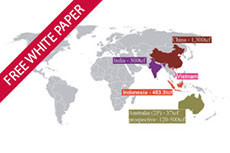 The debate on energy prices in the UK overlooks the key role coal can play in controlling energy costs.