The US Energy Information Administration has released its Annual Coal Distribution Report for 2013, providing information on domestic coal distribution by origin state, destination state, consumer category and method of transportation.

Overall, coal distribution to domestic destinations totaled 849.6 million short t – a drop of 27.8 million short t (3.2%) on 2012. Of this, the electric power sector took the vast majority (92.4%), while industrial plants too 5%, coke plants too 2.4% and other commercial and institutional plants the remaining 0.2%. 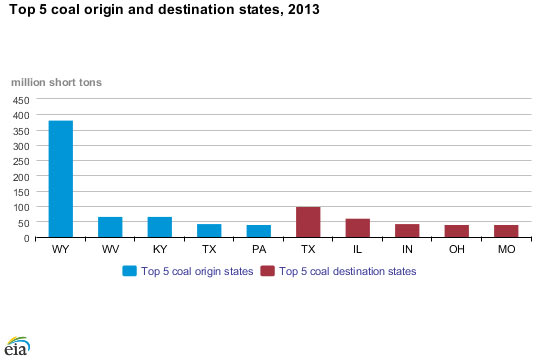 Railroads moved the majority of the coal, accounting for 68.4% of shipments. River transportation accounted for 12.4%, trucks about 11.4% and tramways, conveyors and slurry pipelines 7.8%.

Read the article online at: https://www.worldcoal.com/coal/16122014/world-coal-eia-releases-2013-coal-distribution-report-coal1684/