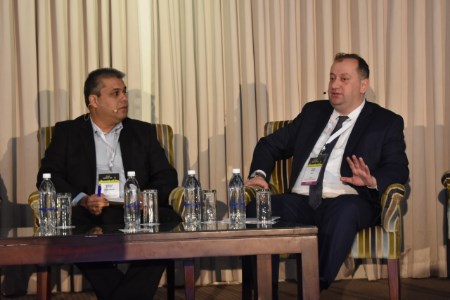 He was speaking during a panel discussion on how the coal sector can assist Eskom in resolving its power generation challenges at the inaugural Coal Industry Day in Johannesburg on Wednesday 24 July 2019.

Bayoglu said that although none of Menar’s subsidiaries currently have contracts with Eskom at this stage, they were in discussion with the utility about offtake agreements, either through existing operations and/or acquisitions of new ones.

He pointed out that the coal industry lacked both an industry champion and a lobby grouping – this was despite the fact that around 75 - 80% of electricity produced by Eskom stemmed from coal-fired power plants.

Furthermore, he lamented the fact that, the largest coal miners in South Africa, were not in attendance at the conference where coal as a source of power was a major discussion. Eskom was represented Dan Mashigo, a Senior General Manager.

“It is also very disappointing that industry bodies that are meant to represent all commodities and miners have not been vocal in their support for the coal sector,” Bayoglu added.

Eskom as the state utility has the mammoth task of providing electricity to South Africa and its neighbouring countries as everyone needs power. However, the utility receives no support with regards to coal supply.

“It is easy to blame Eskom for its past failings, but the reality is that we, as coal miners, need to support Eskom. We can do so by providing it with the correct quality coal at a cheap price. Selling coal to Eskom at inflated prices is self-defeating, as it has serious negative financial consequences for the utility, and the South African economy broadly,” Bayoglu warned.

He once again pointed out, that coal and renewable energy sources were not in competition with each other, but instead should be viewed as complementary power sources. However, Bayoglu stated that renewables could not provide the national grid with baseload, which is essential to providing the consistent flow of power to households and industry; without which the economy would come to a grinding halt.

“No one would tell Saudi Arabia to stop producing oil. The same should hold true for South Africa and coal, as this is the source of our baseload power generation.”

South Africa does not possess sufficient gas or oil resources, nor does it have a fleet of nuclear power stations to adequately provide baseload capacity. Therefore, the country’s cheapest and most dependable form of baseload power supply remains coal.

In addition to the consistent supply of power that coal provides the national grid, it also (directly and indirectly) employs around 700 000 people, according to research undertaken by The Fossil Fuel Foundation.

“If we multiply this figure by 10 (which is the average number of people that are dependent on a single salary earner in South Africa), then over 7 million people are dependent on the coal sector for a living,” Bayoglu remarked, adding that this was particularly pertinent given that South Africa is faced by a record high unemployment rate of 27.6%.

He said that while it was true that there were coal deposits in neighbouring countries, it made no sense to seek out those opportunities, when South Africa still had large minable coal reserves that could be easily developed into low-cost, opencast mines for the benefit of the country.

“South Africa has also invested billions into establishing world class infrastructure including 380 000 km of grid to support the coal industry, which neighbouring countries still need to develop if they want to compete with South Africa,” stated Bayoglu.

He emphasised that moving out of coal into gas for example would be a very expensive undertaking and not something that South Africa could easily afford taking into account its already constrained fiscus.

“Coal forms part of South Africa’s national patrimony that needs to be used to support the country’s economic aspirations, which is undoubtedly underpinned by having a power utility that is supplied correctly specified coals at the right price,” stated Bayoglu.

Read the article online at: https://www.worldcoal.com/coal/16082019/coal-is-critical-to-enabling-south-africas-stability-and-future-growth/