For decades, coal has been the dominant energy source for generating electricity in the US. The Energy Information Administration’s (EIA) Short-Term Energy Outlook (STEO) is now forecasting that 2016 will be the first year that natural gas-fired generation exceeds coal generation in the US on an annual basis. Natural gas generation first surpassed coal generation on a monthly basis in April 2015, and the generation shares for coal and natural gas were nearly identical in 2015, each providing about one-third of all electricity generation. 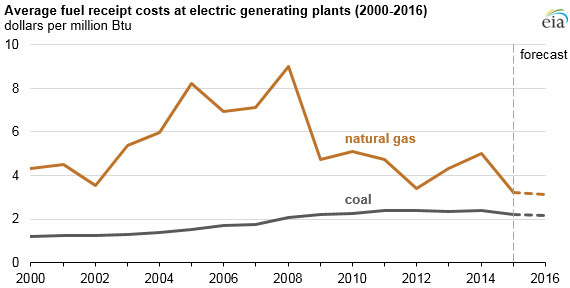 Environmental regulations affecting power plants have played a secondary role in driving coal's declining generation share over the past decade, although plant owners in some states have made investments to shift generation toward natural gas at least partly for environmental reasons. Looking forward, environmental regulations may play a larger role in conjunction with market forces. Owners of some coal plants will face decisions to either retire units or reduce their utilisation rate to comply with requirements to reduce carbon dioxide emissions from existing fossil fuel-fired power plants under the Clean Power Plan, which is scheduled to take effect in 2022 but has recently been stayed by the Supreme Court pending the outcome of ongoing litigation.

Beyond the growing market share for natural gas-fired generation over the past decade, coal's generation share has also been reduced by the growing market share of renewables other than hydroelectric power, especially wind and solar. Unlike the growth of natural gas-fired generation, which has largely been market-driven, increased use of nonhydro renewables has largely been driven by a combination of state and federal policies. The use of renewable energy sources, such as wind and solar, has also grown rapidly in recent years so that generation from these types of renewables is now surpassing generation from hydropower.

The March 2016 STEO expects that the combination of market forces and government policies will continue to stimulate the use of natural gas and nonhydro renewables for power generation. In the EIA's forecast, natural gas provides 33% of generation in 2016 while coal's share falls to 32%. The expected share of nonhydro renewables increases to 8% in 2016, with hydropower's share at 6%.

Read the article online at: https://www.worldcoal.com/coal/16032016/could-natural-gas-surpass-coal-in-the-us-power-generation-fuel-mix-in-2016-410/