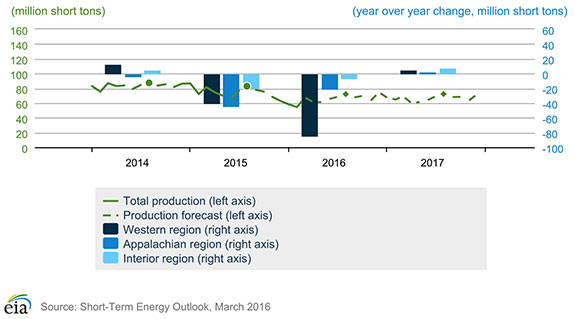 The Interior region is expected to account for 21% of production in 2016 and 2017 up from just 13% in 2006, reflecting its growing competitive advantages compared to Appalachian and Western coals. These advantages include higher heat content, closer proximity to markets compared to Western coal and lower mining costs than Appalachian coal – a result of high-productivity longwall operations.

Interior coal has also benefited from the roll-out of sulfur dioxide scrubbers at coal-fired plants, a result of compliance with the Mercury and Air Toxics Standards (MATS), which mitigate the high sulfur content of Interior coal.

The sharp fall in coal production comes in response to falling consumption in the electric power sector, which the EIA estimates will fall by 4% (29 million short t) in 2016 after a 13% drop in 2015, exacerbated by high utility stockpiles. These stood at 197 million short t in December 2015 – significantly above the 10 yr average for December coal inventories of 158 million short t. 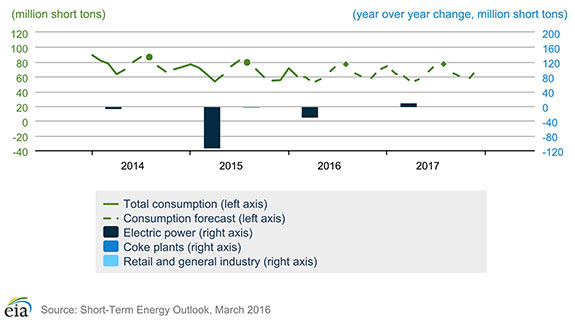 Exports will also continue their downward slide as a glut in global coal supply push prices lower, while lower costs and favourable exchange rates continue to benefit other coal-exporting countries. EIA estimates US coal exports fell 23 million short t (24%) in 2015 to 74 million short t. That decline will continue through 2016 and into 2017.