Rio Tinto has slipped to a US$ 3 billion loss for 2012 after taking post-tax writedowns of over US$ 17 billion on its aluminium and Mozambique coal businesses. Announcing the results, Sam Walsh, the company’s new CEO, promised an “unrelenting focus on pursuing value for shareholders. To do this we need to run the business as owners not managers […] my immediate priority is to build more focus, discipline and accountability throughout the organisation. Walsh took over as CEO in January after the massive writedowns forced Tom Albanese to resign.

Despite the loss, the results were slightly better that market expectations, with the company announcing a full-year dividend higher than that forecast by analysts.

Metallurgical coal production was 9% lower than in 2011 after a plant shutdown at the Kestral mine due to an ongoing mine expansion project. This is expected to be completed this year, increasing production by 1 million tpa, extending the life of the mine to 2032 and reducing unit operating costs.

Thermal coal production was 16% higher than 2011, benefiting from the expansions in the Hunter Valley operations, the continued ramp-up at Clermont mine and the company’s increased ownership in Coal & Allied.

In 2013, Rio Tinto’s share of Australian hard and semi-soft metallurgical and thermal coal production is expected to be 8.5 million t, 4 million t and 20.5 million t, respectively.

Mozambique: infrastructure is the key

Infrastructure will continue to be the limiting factor in Rio Tinto’s operations in Mozambique. As the company noted in its annual report: “The development of infrastructure to support the coal assets is more challenging than originally anticipated. [We] sought to transport coal by barge along the Zambezi River, but this option did not receive formal approvals. These infrastructure constraints, combined with a downward revision to estimates of recoverable coking coal volumes on the Rio Tinto Coal Mozambique (RTCM) tenements, have led to a reassessment of the overall scale and ramp up schedule of RTCM, and consequently to the impairment.”

Phase one production from the Benga mine is expected to ramp up to a rate of 1.4 million tpa of metallurgical coal and 0.8 million tpa of thermal coal in 2013.

Rio Tinto also announced that the Energy group is “undertaking a review of the optimal growth profile for all business units in light of market conditions for coal and uranium, the high-cost operating environment in Queensland and New South Wales, and infrastructure constraints in Mozambique”.

The company also announced that it would be reducing CAPEX to approximately US $13 billion in 2013 as part of a strategy to improve shareholder value by only investing “in assets that, after prudent assessment, offer attractive returns that are well above our cost of capital”. It would also be implementing cost-cutting strategies to save US$ 5 billion by 2014.

As well as the talk about shareholder value, Walsh was also able to offer a glimmer of demand-side hope: “Looking ahead, we see the positive momentum in the fourth quarter of last year being sustained into 2013 with Chinese GDP growth returning to above 8% in 2013.” This echoes predictions from the world’s largest equipment manufacturer, Caterpillar, which predicted growth of 8.5% in China in 2013 when it announced its 2012 results; the International Monetary Fund predicts growth of 8.2%.

Growth in Chinese demand would help to reduce some of the surplus supply that led coal prices on a downward spiral in 2012, particularly as demand in the US looks set to be weak again in 2013. This will continue the flow of exports from US coal producers needing to find buyers for coal that is no longer required in their domestic markets. According to the US Energy Information Administration, US exports are expected to have reached in excess of 120 million t last year, beating the previous record of 113 million t set in 1981.

Read the article online at: https://www.worldcoal.com/coal/14022013/rio_tinto_announces_3_billion_dollar_loss_159/ 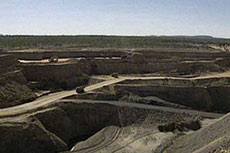