Australian firm New Age Exploration (NAE) has suggested it could create 400 jobs if a working mine can be brought into business at Lochinvar.

Four boreholes were drilled in the Lochinvar field over 2013, as NAE looked to establish the potential for a metallurgical coal mine at the site.

The area the company has an exploration license for extends as far as Evertown, near Canonbie, and as far south as Longtown.

In a statement to the Australian Securities Exchange (ASX), NAE said it had signed a deal with Irish group Priority Drilling to create a further four exploration holes.

Gary Fietz, NAE managing director, said: “The completion of necessary approvals and signing of a drilling contract with Priority Drilling represents a significant development for the Lochnivar project.”

The company hopes the extended exploration will provide a clearer picture of the potential for any future mine. If one were to open at the site, it would operate as an underground mine.

The coalfield was discovered in the 1950s by the National Coal Board and was subject to drillings several times during the 1970s and 1980s. However, there was no farther progression at these times.

The coal is shallowest in the north and west of the field and any mining operation would likely start from this point.

A rail hub to transport the coal would also need to be constructed. The Ministry of Defence’s (MoD) sites at Eastriggs and Longtown, which have direct links to the west coast main line, have been mentioned as possible locations for this.

In the ASX report, NAE said it had visited Eastriggs and spoken to both rail companies and port operators, which have confirmed that there is the capacity to transport coal from Lochinvar.

NAE has stressed the earliest possible start date for the mine would be 2017.

Beer & Co, an Australian corporate advisory firm, recently valued the Lochnivar project at US$ 200 million. The firm said the project would have low running costs, partly because infrastructure is already in place and staff would be based near a mine.

“In our view, the project has a strong likelihood of being delivered as projected, partly because the project scope is manageable,” Beer & Co. said.

Read the article online at: https://www.worldcoal.com/coal/12022014/further_drilling_and_uk_coal_project_505/ 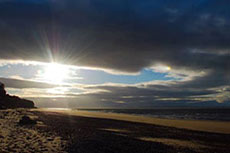 Mining operations in Scotland will be aided by reduction in charges, according to Energy Minister.