Sibambene Coal, a 51% black-empowered coal mining company that is looking for coal assets, wants there to be fair competition to allow for new black mining entrepreneurs to enter mainstream mining, the company’s director Dr Sakhile Ngcobo has said. 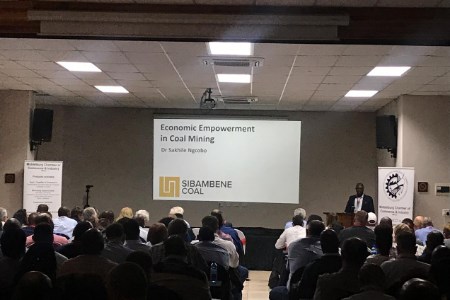 In the interest of growing the South African economy, the company also aspires to supply good quality coal to Eskom at below the average prices.

Speaking to delegates at the inaugural MCCI Coal Mining Symposium on Thursday (5 September 2019) in Middelburg, Mpumalanga, Ngcobo stated that in order to change the landscape of the South African coal mining sector, the company was facilitating the entrance of new players.

Ngcobo said it was about time the model of black economic empowerment (BEE) changed to include new entrants. “Why should we see the same faces of empowerment over and over again? We have to change the approach to BEE. It can’t be the same.”

For its part Sibambene have created 12 companies that are owned mainly by black women and young people, including four community owned entities, with around 120 beneficiaries in total.

Ngcobo said that Sibambene wanted to see government acting on President Cyril Ramaphosa’s undertaking to “use competition policy to open markets up to new black entrants, and invest in the development of businesses in townships and rural areas.”

The remaining 49% shares are held through a structure owned by global energy trader Mercuria and mining investment firm Menar, which are successfully developing coal mines in South Africa.

Ngcobo questioned whether BEE deals were being awarded specifically to certain individuals. “We require far higher levels of transparency, and call on industry players to provide greater opportunities for emerging black industrialists like ourselves,” remarked Ngcobo.

He said that it was no longer acceptable to empower just a few people, but instead hundreds of BEE partners needed to be empowered to ensure genuine empowerment and transformations and that all BEE initiatives should include women and youth empowerment initiatives.

Local procurement needed to support the genuine development of entrepreneurs that owned equipment and were not reliant on existing untransformed monopolies, which was fronting of the worst kind and significantly undermined government transformation drive.

“Social Labour Plans have to play a significant role in the lives of local communities, and should not be piecemeal in nature. We need to make communities fully fledged partners in all our endeavours to avoid the increasing hostility that we see from communities with violent protests at or near mining operations” he stressed.

He said some of the protests around mines were as a result of companies not involving communities in empowerment initiatives. “The costs of these protests that we see every day are immense”.

He also emphasised that there needed to be strong, disciplined leadership by community leaders to ensure that opportunistic and mischievous elements did not undermine the greater interests of communities by causing unnecessary upheavals.

“Coal CEOs and general managers must lead from the front to ensure that empowerment is not just words but a meaningful action that brings about black excellence throughout organisations,” he said.

Read the article online at: https://www.worldcoal.com/coal/09092019/sibambene-coal-changing-the-landscape-of-south-african-coal-mining/