Global coal production is expected to grow only marginally in 2020, from 8.13 billion t in 2019 to 8.17 billion t in 2020 a growth of only 0.5% after three consecutive yearly increases, due to the disruptions caused by the coronavirus pandemic according to GlobalData. 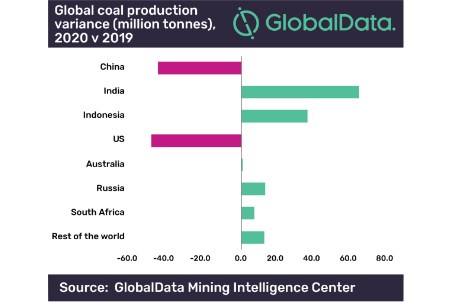 Disruption to date has been most significant in China. Coal production declined by around 6% in the first two months of 2020 as workers could not return to mine sites, owing to the prolonged Lunar New Year holidays as well as road blockages and lockdowns to control the outbreak of the virus. This led to only 57% of China’s coal mines being operational as of 14 February. However, by 4 March 83% of China’s coal mining capacity was operational and production is now expected to recover over the remainder of 2020 with a forecast decline of only 1.2% expected by the year end.

Vinneth Bajaj, Senior Mining Analyst at GlobalData, stated: “Across the globe, compared with other commodities coal production is only expected to be marginally affected by the impact of the coronavirus as thermal coal mines are permitted to operate during lockdowns as they are deemed essential to maintain power supplies.”