Siberian Coal Energy Company (SUEK) – one of the world’s largest coal and energy companies in the world and the leading coal, heat and power producer in Russia – and Nippon Export and Investment Insurance (NEXI) signed the Memorandum of Understanding (MoU) at XXIII St. Petersburg International Economic Forum on 6 June 2019. 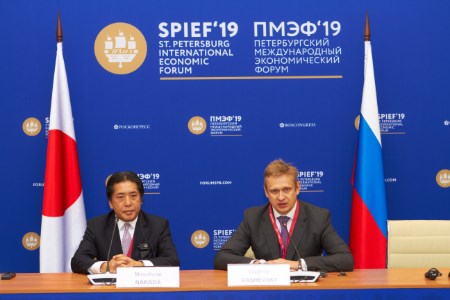 The MoU creates a general framework for co-operation between SUEK and NEXI, among other issues, to seek business, economic, financial and policy development opportunities for the mutual benefit of both parties.

The MoU was signed by Vladimir Rashevsky, CEO of SUEK, and Masafumi Nakada, President of Nippon Export and Investment Insurance. The signatories expressed their confidence that the agreement will broaden and deepen co-operation between the parties, as well as relationship between the Russian Federation and Japan.

Read the article online at: https://www.worldcoal.com/coal/07062019/suek-and-nexi-sign-mou/