Kangra Coal made history on 2 May 2019 when it hosted a celebration to announce plans to allocate free-carry (unencumbered) shares to workers and local communities for the first time since the mine was established in 1957. 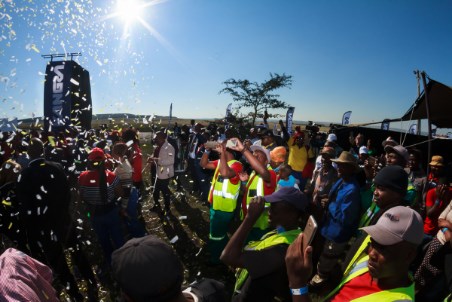 Workers were given a day off to be part of the celebration with the mine managers and local community members. This was an initiative of Menar, the investment company that purchased Kangra through its subsidiary Canyon Coal in September 2018.

Billed as the ‘Kangra new beginning’, the event was held near the mine, which is located in the Mkhondo municipality. The municipal leaders, traditional authority leaders and other community leaders joined the celebration.

Workers and community members ululated when Menar Managing Director Vuslat Bayoglu presented symbolic certificates to signify the 5% allocation to each. The shares will be held under separate trusts.

“In the next few months, the legal process to give effect to the allocation will be concluded, but we thought we should make our intentions firmly clear right from the start so that you can assess us against our undertaking,” he said.

Speakers at the ceremony lauded the initiative, saying it laid the foundation for the redefinition of the relationship between workers, the community and the new mine owners.

Chairman of Menar, Mpumelelo Mkhabela, said the share allocation to employees and community was different to the usual employee share-ownership schemes were shares are granted for a limited period.

“This is a permanent arrangement. For as long as you work at Kangra, you will own shares. If the company makes profits and dividends are declared, you will also benefit from dividends that will accrue to the employee trust,” Mkhabela explained.

Canyon Director Dr Sakhile Ngcobo provided a broad overview of Kangra's operations, explaining that the company is involved in the mining and processing of thermal coal, through the operation of an underground mine, along with several opencast pits, located in the Mpumalanga coalfields.

Kangra currently produces about 2 million tpy of saleable coal with the majority of its high volatile coal sold on the export market, and the rest sold to independent users.

Menar Social Licensing Manager Xolile Mankayi emphasised that Menar greatly valued its relationship with local communities and organised labour, and was committed to uplifting the communities in which its mines operated.

"At Kangra we are working on creating a model that can be used for fruitful engagement with workers, community leaders, local municipalities and traditional authorities. We are excited that we will be working with all stakeholders to develop a model that will be beneficial to all parties."

He outlined key principles that should anchor better understanding among all stakeholders. These included trust and the need to build professional relationships.

The importance of mutual understanding was also echoed by NUM local leader Isaac Mbonani who thanked Menar for giving shares to workers and the company’s willingness to address the concerns of the employees.

“We welcome the new beginning of Kangra and we hope the new shareholders will keep their promise,” he said.

Kangra aims to ensure it implements employment equity targets at management level and review them on a regular basis. On capital goods, services and consumables Kangra pledges to give preference to historically disadvantaged South African (HDSA) companies on a progressive basis through capacity development programmes. Kangra will endeavour to employ from local communities and provide access to training opportunities.

In his keynote address Mkhondo Executive Mayor Vusi Motha urged communities to be orderly when they raise concerns. They should not close off roads during protests and they should use community structures to raise concerns.

"We must not scare investors off. The new owners must be given the opportunity to prove themselves. Lets work with them and lets contribute to stability in our communities," Motha said.

Bayoglu said the ceremony was a practical expression of inclusive growth, one of South Africa’s noble socio-economic aspirations. “We are changing the narrative for the mutual benefit of all stakeholders,” he concluded.

Read the article online at: https://www.worldcoal.com/coal/07052019/kangra-to-allocate-unencumbered-shares-to-workers-and-community-in-a-historic-first/