Paringa Resources Limited has announced that production ramp up has begun with the commencement of higher productivity, continuous underground mining operations at the Poplar Grove mine with company-operated mining equipment and labour. Raw coal is being brought to the surface and has been processed by Poplar Grove's CHPP. 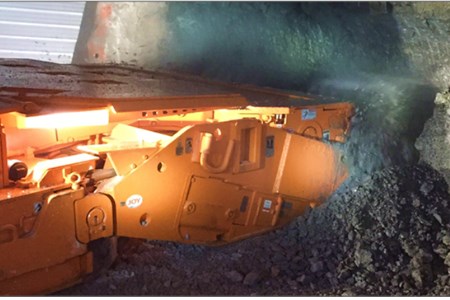 Mining to date has been undertaken by Paringa's mining contractor as part of the bottom development using drill and blast techniques. These development activities have included creating a void for the installation of underground infrastructure at the bottom of the slope and a turnout area to enable the efficient movement of underground mining equipment. This mining activity has produced raw coal which has been run through the CHPP as part of the testing and commissioning of the surface infrastructure.

The mining contractor's last piece of work is to undertake 80 ft of development mining via drill and blast over the next month, that will occur in tandem with Paringa's operational teams.

The next underground mining development activity is the connection of the return and intake air shafts to establish the permanent ventilation system. The connection is being made by Paringa owned continuous miners in the coal seam, from the turnout to the base of the intake shaft and then to the base of the return shaft. This mining is producing raw coal for processing and subsequent sale to LG&E. Paringa commenced this activity using the recently commissioned company operated mining equipment.

The bottom area ground conditions look good with slightly less water and a more competent roof than was expected, although initial mining with the continuous miner has encountered an area of very hard rock which will slow advancement marginally only in the very near-term.

The Company is targeting delivery of first processed coal to cornerstone customer LG&E in the second half of March 2019, and has progressed initial shipments activities, including a 2019 shipping schedule and invoicing and payment procedures.

The CHPP is fully commissioned and has been run several times, processing raw material from the mine, with feed comprised of raw coal and waste rock material. The proportion of raw coal in the plant feed will significantly increase in the coming weeks as mining activities continue using the company operated continuous miner in the coal seam as part of establishing the permanent ventilation system.

All other surface infrastructure including the workshops, bath house and river dock has been commissioned.

Read the article online at: https://www.worldcoal.com/coal/07032019/coal-production-ramps-up-at-poplar-grove-mine/