Morning Consult released new national poll results that indicated there is major support of coal-based electricity in the US – with 54% in favour.

The American Coalition for Clean Coal Electricity has indicated: “Once again, the writing is on the wall – American voters overwhelmingly support the use of coal to generate electricity. And once again, public opinion does not match public policy. In a new national poll conducted by Morning Consult, 54% of registered voters ‘totally approve’ the use of coal to generate electricity, compared to 32% who ‘totally disapprove.’ 14% have no opinion.”

It concluded: “Despite the near-constant fearmongering campaign conducted by this administration and its allies, the electorate continues to recognise the importance coal plays in the production of affordable and reliable energy.” 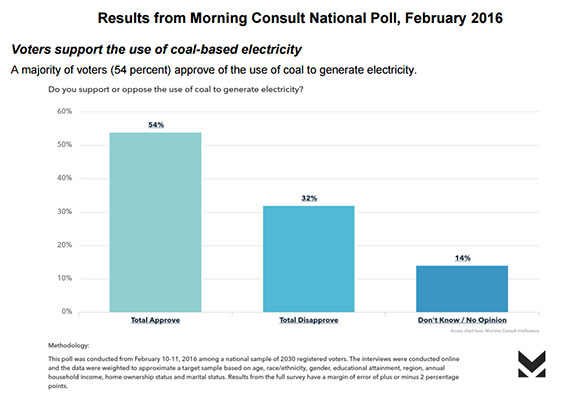 Read the article online at: https://www.worldcoal.com/coal/07032016/new-poll-finds-major-support-for-coal-fired-electricity-in-the-us-341/