Anglo American has announced that it has acquired 100% ownership of Peace River Coal Limited Partnership (PRC), which comprises the Trend metallurgical coal mine and various exploration leases in British Columbia, Canada, through the acquisition of the 25.17% interest in PRC that it did not already own.

Seamus French, CEO of Anglo American’s metallurgical coal business, said: “PRC is a large and high quality metallurgical coal resource of approximately 1 billion t, on an attributable basis, supported by well-developed power, rail and port infrastructure. We see significant resource upside and plan to invest in further exploration studies to ascertain its full long-term potential. In the near term, we will be progressing a feasibility study to increase production from 1 million tpa to 3.5 million tpa by 2015.”

Read the article online at: https://www.worldcoal.com/coal/05102011/anglo_american_acquires_full_ownership_of_peace_river_coal_canada/ 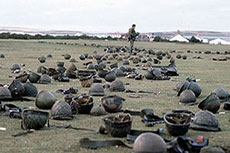 Anglo American, one of the world’s largest miners, is partnering with International Alert, a leading peacekeeping NGO that specialises in building sustainable peace in areas affected by violent conflict. The three year partnership aims to promote and implement business practice that will prevent conflict and protect and promote human rights.