Joe Funk, President and Chief Executive Officer of Rhino's general partner, stated, "Our board maintained the distribution at its current level preserving the liquidity of the Partnership as the prolonged weakness in the coal markets continues to adversely impact cash flow. We continue to adjust our production and cost structure to align with current market conditions. In the fourth quarter, we performed a comprehensive review of our current coal mining operations as well as potential future development projects. We identified various properties, projects and operations that were uneconomical to pursue or maintain due to the changes in our strategic plans, market conditions or other factors. Based upon these ongoing reviews and changes in our strategic plans, we recorded approximately US$45.3 million in non-cash asset impairments and related charges during the quarter, as well as an additional US$5.9 million impairment charge related to our Rhino Eastern joint venture. We believe these actions along with our continuing focus on cost and productivity improvements at our ongoing core operations will enhance the liquidity of Rhino while retaining the flexibility to continue exploring non-coal investments, which we believe will enhance the long-term value of the Partnership. For the first quarter of 2015, we expect Adjusted EBITDA from continuing operations to be approximately US$4.0 million, which is an improvement over the fourth quarter results.

Our priorities for 2015 will be to preserve liquidity, continue controlling cost, only pursue capital spending with strong justification, and maintain our excellent safety record, all while responding quickly to changing and challenging market conditions. Our balance sheet remains strong with relatively low debt levels and low legacy liabilities.

Since completing the sale of our Utica oil and gas interests, we have kept debt levels relatively low with approximately US$54 million drawn on the bank line of credit at the end of the quarter compared to US$167 million at the same point last year. We currently have no significant planned growth capital expenditures and the investments to develop Pennyrile are nearing completion. We anticipate cash flow to grow at Pennyrile, and expect costs to improve at Hopedale.

During the fourth quarter, the difficult market conditions that continue to affect nearly all coal companies adversely impacted our results. Conditions remained weak in all served markets, with excess supply and low natural gas prices weighing heavily on coal. At Hopedale, poor rail service continued to constrain shipments from this operation while costs remained high due to intermittent adverse geological conditions encountered in the advancement to the new 7-seam reserve. In addition, productivity was lower and costs were higher than anticipated at our new Pennyrile mine due to coal processing issues and geological conditions that we are working through as the mine continues its ramp up. Sales volumes were strong during the quarter at our Castle Valleyoperation and we have completed additional long-term sales agreements through 2016 for coal from this operation.

Our Pennyrile mine ramped up production during the fourth quarter and shipments were made to fulfil our base 800 000 t per year contract. We are in the final stages of completing a long-term sales contract with another local utility customer for 120 000 t in 2015, 400,000 tons in 2016 and 550,000 tons in 2017. We have added a second mining section at Pennyrile to increase production capacity to fulfil the long-term sales contracts. We received permission for a deep cut mining plan, which will help lower costs. Pennyrile gives us additional diversification and we expect it to be a significant generator of stable cash flow as it ramps up to its full potential run rate of two million tons per year.

Our Castle Valley operation is sold out through 2016 while our Hopedale and Sands Hill operations in Northern Appalachia are sold out for the remainder of 2015. At Pennyrile, additional test burns may lead to additional sales contracts, which could bring this mine to its potential full run rate of two million tons per year. Market conditions in Central Appalachia have remained challenging with continued depressed met and steam coal prices weighing on producers. In Central Appalachia, we have remained focused on safe operations while keeping costs as low as possible with reduced levels of production and sales."

Read the article online at: https://www.worldcoal.com/coal/05032015/rhino-announces-fourth-quarter-financial-2019/ 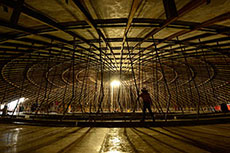 After years of planning and construction, the first project to convert gas from coal seams into LNG is ready to export its product.