Despite this, weekly coal production estimates have shown a slight uptick over the past few weeks compared to the lows of early April when production hit a low of 10.2 million short t. 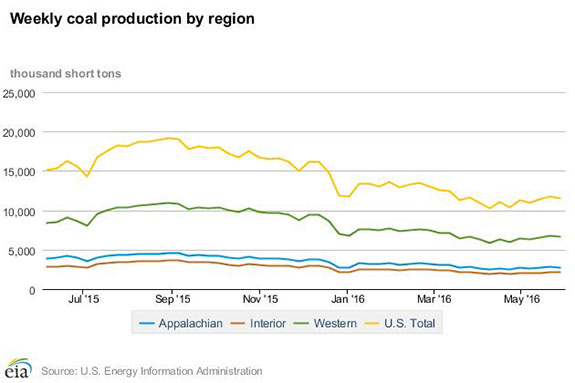 In terms of total volume, however, the West Region has dropped the most, falling from 209.9 million short t last year to just 156.4 million t this year.

Looking ahead and US coal production could fall by over 200 million short t this year, according to Taylor Kuykendall of SNL Global Market Intelligence.

@jonorichard @joyglobal @ClarkWDerry About right. If you just annualize Q1 data (x4), it'd be down 204.9M ton this year.

Joy Global, a leading equipment supplier to the global mining industry, recently said it expected coal production to fall 190 million short t in the US this year, calling US coal its “most challenged end-market”.