The fundamentals of turning coal into a liquid have been around for almost a century and are far from being a dark art. 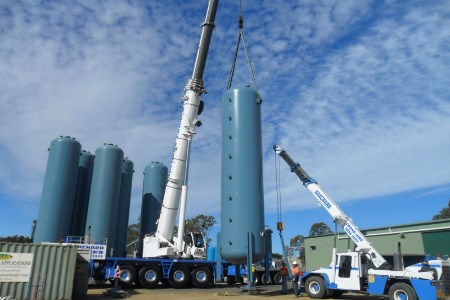 However, when New Hope decided to build a concept plant at Jeebropilly it took several years for the company’s Projects Department to detail the process to suit their vision before the design was finalised.

Through a process called pyrolysis, coal can be ‘baked’ in an inert, or non-reactive atmosphere, releasing gas which is captured and then further processed, or distilled, using Fischer Tropsch (FT) synthesises to produce fuel such as diesel.

New Hope Project Manager Hans Paustian said while the process has been proven in large scale operations, the challenge for New Hope was to prove a scaled down version would work safely and prove environmentally compliant in the Australian context.

“Basically, we needed to see if it was economically viable for a small scale plant to be located at a mine site, producing a suitable fuel for the site’s diesel powered equipment,” Hans said.

“Although the project involved an overseas secondment for several years, the most difficult aspect was in verifying and modifying the equipment to meet Australian standards and regulations.

“Like all projects this was a group effort and we called on the skills and experience of both in-house workers and external consultants. Once in Australia the entire New Hope Projects department checked every piece of equipment, its design and aspect of risk, safety and environment to ensure it was suitable for use.”

Hans said the work overseas consisted of becoming competent with the technology and arranging the shipping of the equipment.

“We set up a laboratory in Pittsburgh where we conducted tests to verify the process results,” Hans said.

Read the article online at: https://www.worldcoal.com/coal/03012019/new-hope-turns-to-alchemy/