The world’s first industrial scale demonstration of oxyfuel combustion and carbon capture technology has been completed at the Callide Oxyfuel Project in Central Queensland, bringing the world a step closer to a cleaner energy future.

The Callide Oxyfuel Project’s demonstration phase draws to a close in March 2015. The US$245 million international joint venture project has achieved over 10 000 hours of oxy-combustion and more than 5500 hours of carbon capture from the coal-fired electricity generation facility at CS Energy’s Callide A Power Station. 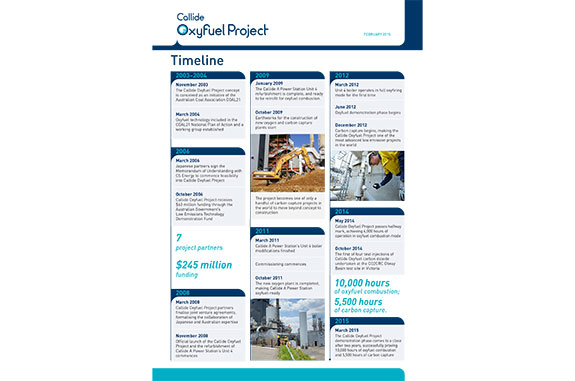 One of only a handful of low emission coal projects in the world, the Callide Oxyfuel Project is making a significant contribution to the international carbon capture and storage knowledge bank.

The learnings and results from the project will be analysed by the Project’s technical team, published and potentially applied to future low emission projects worldwide.

According to Callide Oxyfuel Project Director, Dr Chris Spero, the international partnership has made a significant global contribution towards finding new ways of producing cleaner and affordable electricity from fossil fuels.

Dr Spero said the Callide Oxyfuel Project is a great story about what can be achieved through good science, good engineering and international collaboration, in the pursuit of near-zero emissions from coal fired electricity generation.

“We successfully tested oxyfuel technology and carbon dioxide capture under ‘live’ power station conditions for more than two years, and our results show it is ready for the next steps toward commercial application,” he said.

The Callide Oxyfuel Project has also helped advance the generation industry’s investigations into the viability of carbon dioxide storage through its collaboration with CO2CRC.

“Carbon dioxide from the Project was transported by road to Victoria and injected underground at CO2CRC’s Otway Project site in South Western Victoria. Building on the large body of work already done by CO2CRC, the injected carbon dioxide was used to evaluate the geochemical and physical behaviour of carbon dioxide within the storage rock.

“Our project has helped create a pathway for the design and construction of larger scale oxy-combustion plants with carbon capture, as both ‘bolt-on’ technology to existing plant or as new-build plant.

The project was awarded US$63 million from the Australian Government under the Low Emissions Technology Demonstration Fund. The Callide Oxyfuel Project has also received financial support from the Japanese and Queensland governments and technical support from JCOAL.

Read the article online at: https://www.worldcoal.com/coal/02032015/callide-oxyfuel-project-future-low-emission-coal-1991/

Clean coal could provide a more affordable way to bridge the gap to a low-carbon generation mix in the UK, according to a new report.

The UK Coal Authority has awarded Clean Coal Ltd licences to investigate the potential for underground coal gasification (UCG) at five sites in the UK. If the investigations are successful, commercial operations could start by 2014/15 and could lead to UGC producing 3 – 5% of the UK’s total energy requirement.