Douglas-Westwood (DW) forecasts total expenditure on global LNG facilities will reach US$ 241 billion between 2016 and 2020. This represents a 34% increase compared to the preceding five-year period. The significant increase in capital expenditure (CAPEX) on LNG facilities in recent years has been due to growth in the global economy, which has driven the demand for natural gas. This demand is a function of increased natural gas consumption through economic growth and fuel switching.

The growth in LNG demand is also being driven by the remoteness of many of the large reserves. Globally, many basins with relatively low extraction rates have matured. Consequently, exploration and production (E&P) companies have been forced to develop higher cost plays, notably deepwater, heavy oil and oil sands. Conversely, the gas market has enjoyed a period of booming production underpinned by the advent of shale gas in North America and coalbed methane (CBM) in Australia. This previously stranded gas can now be exploited via LNG and FLNG technology, having been aided by comparatively high gas prices in Asia.

There has however been a recent decline and with LNG spot prices lagging behind oil price movement, it will likely get worse before it gets better. Despite this, in the decades ahead, natural gas will play an increasing important role in meeting the world’s energy demand.

Global LNG CAPEX has been dominated by Australasia and Asia in recent years; however, over the forecast period all regions are expected to experience positive growth, except for Australasia where the LNG construction boom looks to be coming to an end.

The construction boom was preceded by massive investments in large LNG projects, such as the Gorgon LNG, Ichthys LNG, GLNG LNG and Wheatstone LNG projects. Consequently, this has propelled the country into a new production phase, hereby making Australia the world’s largest country producer of LNG, over¬taking Qatar as the largest exporter by the end of the forecast period. 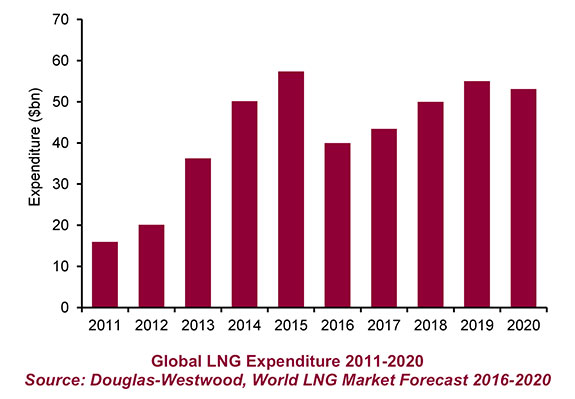 Globally, the largest proportion of the total expenditure will be attributed to liquefaction projects, which account for 66% of spend over the forecast period. Import facilities will constitute 21%, while spending on LNG carriers will represent 13% of total expenditure between 2016 and 2020. 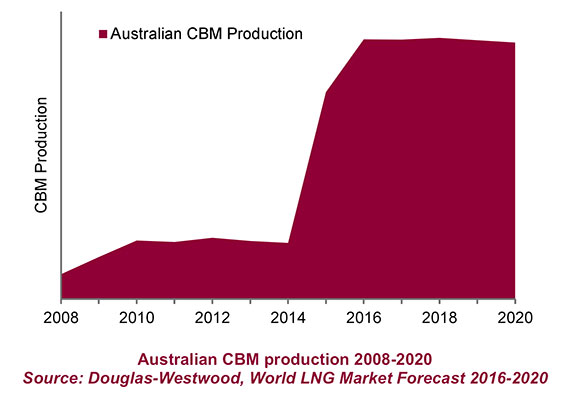 Australia possesses a significant amount of CBM and offshore gas reserves that will feed highly anticipated liquefaction projects. However, export projects in the country have been plagued with cost escalations, which will cause inevitable delays.

The country is likely to increase its unconventional gas production over the forecast period, having increased CBM production from 112 bcm to 432 bcm between 2010 and 2015. Production will continue to rise in order to supply major export projects such as APLNG, QCLNG and GLNG.

CBM from Queensland’s Bowen and Surat basins will be transported to the GLNG facility to be used as feedstock for the LNG project. With more liquefaction facilities expected onstream in 2016 and 2017, Australia is likely to benefit from its regional position, supplying significant amounts of LNG to Asia. Given the relatively close proximity of Asia and Australia, it is likely that LNG traded between the two regions will be at a discounted rate due to lower logistical costs; therefore, the country is well placed to monetise its CBM reserves as LNG.

In the decades ahead, natural gas will continue to be a vital influence in answering Asian and European gas needs and will require liquefaction due to the remoteness of new large gas reserves. The demand for LNG will continue to grow in the long-term due to its widely applicable use as a fuel source for power generation, industry and commerce. The long-term potential of the LNG industry is evident as vast reserves of natural gas found in remote regions such as East Africa and the Arctic present considerable LNG opportunities for the future.

About the author: Mark Adeosun is a Researcher at Douglas-Westwood. Edited by Jonathan Rowland.